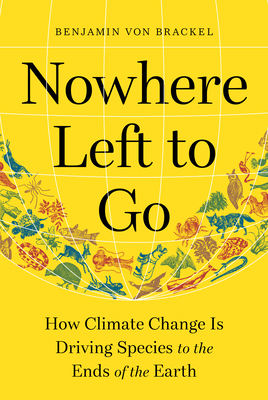 As humans accelerate global warming while laying waste to the environment, animals and plants must flee to the margins: on scattered nature reserves, between major highways, or among urban sprawl. And when even these places become too hot and inhospitable, wildlife is left with only one path to survival: an often-formidable journey toward the poles as they race to find a new home in a warming world. Tropical zones lose their inhabitants, beavers settle in Alaska, and gigantic shoals of fish disappear—just to reappear along foreign coastlines.

Award-winning environmental journalist Benjamin von Brackel traces these awe-inspiring journeys and celebrates the remarkable resilience of species around the world. But the lengths these plants and animals must go to avoid extinction are as alarming as they are inspirational: Sea animals—like fish—move on average 45 miles a decade to cooler regions, while land animals—like beavers and butterflies—move 11 miles. As even the poles of the Earth heat up, we’re left with a stark and irreversible choice: Halt the climate emergency now, or face a massive die-off of species, who are increasingly left with nowhere else to go.

Benjamin von Brackel is a renowned environmental journalist whose reporting on climate change has appeared in Süddeutsche Zeitung, Die Zeit, and Natur. He is the cofounder of Klimareporter°, an Environmental Media Prize-winning online magazine dedicated to the climate emergency, and coauthor of Angry Weather: Heat Waves, Floods, Storms, and the New Science of Climate Change. He is based in Berlin, Germany.

“Brackel examines question[s] that have arisen from the massive migrations spurred by global warming. The book discusses the research into how ecosystems might change as old species leave and new ones arrive, as well as the substantial implications for human societies.”—Scientific American

“You can’t understand the next decades of life on earth if you don’t take in [this book’s] message. . . . Von Brackel ably chronicles the research at every latitude and on every continent . . .  [and] writes movingly of indigenous communities now largely bypassed by the whales on which they’ve depended for food and cultural continuity because the small organisms on which the whales feed are moving as the temperatures warm.”—Bill McKibben, New York Review of Books

“A solid, memorable portrait of nature on the move.”—Publishers Weekly

“In hard truths with hints of hope, Nowhere Left to Go shows us how climate change is altering life as we know it. Engaging, elegant, and a thoroughly enjoyable read.”—Camille Parmesan, coordinating lead author of the IPCC’s Sixth Assessment Report

“In Nowhere Left to Go, Benjamin von Brackel brings to life the reality of how climate change is affecting the biological world. It’s a fascinating read, and particularly pertinent for anyone who is concerned about the future of biodiversity.”—Professor Chris D. Thomas, author of Inheritors of the Earth, and director of the Leverhulme Centre for Anthropocene Biodiversity

“Written like a thriller, this book is full of surprising observations of how plants and animals are already responding to climate change. I have seldom read such a successful combination of flawless research and linguistic dexterity.”—Wolfgang Kießling, lead author of the IPCC’s Sixth Assessment Report

“This lively book chronicles the challenges conservationists face to chart a new future where species can adapt and cope. Humanity needs to do an environmental U-turn if we are to save the Earth’s biota and ourselves.”—Eric Dinerstein, Director of Biodiversity and Wildlife Solutions at RESOLVE and author of What Elephants Know