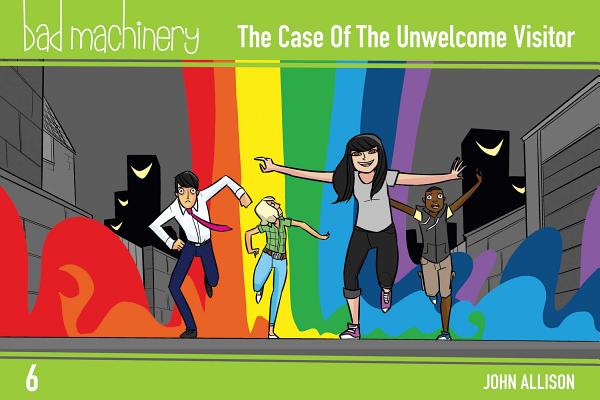 This is book number 6 in the Bad Machinery series.

The Case of the Unwelcome Visitor is the sixth, pocket-sized book in John Allison's award-winning Bad Machinery series.

School is out for summer, and for the Tackleford mystery team, that means lazy days, balmy evenings, and... creeping existential dread that threatens the whole city. With half the team gallivanting off to exotic locales (like Aunty Kath's in Margate), can Linton, Jack, and Lottie solve this season's most dire case?

The Case of the Unwelcome Visitor, the sixth book in John Allison's award-winning Bad Machinery series, pits our young heroes against the terrors of the unfamiliar and unknown. Lottie's mum and sister have both fallen in love (thanks to the internet), Linton is determined to save his father from the soul-sucking responsibility of a promotion, and why is Jack working at the local paper with team nemesis (and hot-shot reporter) Erin Winters? Isn't print meant to be dead?

Could the link between these tangled threads be The Night Creeper, who prowls Tackleford's streets and leaves people in the hospital with a blank stare and a terrible smile on their face?

Born in a hidden village deep within the British Alps, John Allison came into this world a respectable baby with style and taste. Having been exposed to American comics at an early age, he spent decades honing his keen mind and his massive body in order to burn out this colonial cultural infection. One of the longest continuously publishing independent web-based cartoonists, John has plied his trade since the late nineties moving from Bobbins to Scary Go Round to Bad Machinery, developing the deeply weird world of Tackleford long after many of his fellow artists were ground into dust and bones by Time Itself. He has only once shed a single tear, but you only meet Sergio Aragon's for the first time once. John resides in Letchworth Garden City, England, and is known to his fellow villagers only as He Who Has Conquered.