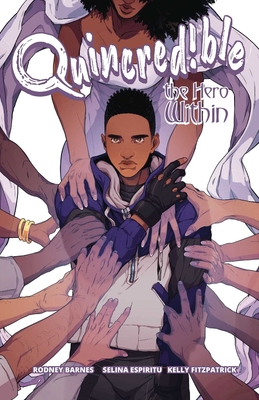 "A heartfelt voyage through time and space." - Kirkus

Rodney Barnes and Selina Espiritu return for another Quincredible adventure, this time diving into the world of Voodoo. Quinton West is back as the would-be hero of his city New Orleans, battling against a new enemy who wishes to claim the historical land for himself.

When meteors fell to Earth Quinton West was gifted with the power of invulnerability. Seeing others take up hero identities, Quinton decided to help his city of New Orleans in his own way. Using his smarts, creativity and a bit of training from his mentor Glow, Quinton is on his way to becoming Quincredible, hero of New Orleans!

Rodney Barnes is the award-winning writer/producer of HBO's Showtime, Hulu's Wu-Tang: An American Saga, Marvel's Runaways, Starz's American Gods, and a host of other television programs and films. He has also authored graphic novels for Lion Forge's Quincredible and Star Wars - Lando: Double or Nothing, as well as Falcon for Marvel Comics. He is now writing Killadelphia for Image Comics. Rodney resides in Los Angeles.

Selina Espiritu is a freelance illustrator working from the Philippines with an enthusiasm for dogs and storytelling. She has worked on titles such as QUINCREDIBLE, published by Lion Forge, and BRAVE CHEF BRIANNA, by BOOM! Studios. Outside of comics, Espiritu's freelance work revolves around cover illustration and character design, for which she possesses a particular passion for. Otherwise, she amuses herself with her dogs, history books, and her work as an emergency medical technician.

Kelly Fitzpatrick was born in San Antonio, Texas, in the spring of 1988. Received a BFA in Illustration/ minor in Photography and Digital Imaging from the Ringling College of Art and Design in Sarasota, Florida, in 2010. Kelly Fitzpatrick has been awarded and nominated for various awards for her work on Bitch Planet, DC Bombshells, and was recognized as one of the best colorists of 2014 by ComicBook.com.

"A heartfelt voyage through time and space."
— Kirkus