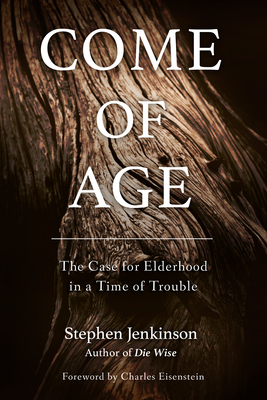 In his landmark provocative style, Stephen Jenkinson makes the case that we must birth a new generation of elders, one poised and willing to be true stewards of the planet and its species.

Come of Age does not offer tips on how to be a better senior citizen or how to be kinder to our elders. Rather, with lyrical prose and incisive insight, Stephen Jenkinson explores the great paradox of elderhood in North America: how we are awash in the aged and yet somehow lacking in wisdom; how we relegate senior citizens to the corner of the house while simultaneously heralding them as sage elders simply by virtue of their age. Our own unreconciled relationship with what it means to be an elder has yielded a culture nearly bereft of them. Meanwhile, the planet boils, and the younger generation boils with anger over being left an environment and sociopolitical landscape deeply scarred and broken.

Taking on the sacred cow of the family, Jenkinson argues that elderhood is a function rather than an identity—it is not a position earned simply by the number of years on the planet or the title “parent” or “grandparent.” As with his seminal book Die Wise, Jenkinson interweaves rich personal stories with iconoclastic observations that will leave readers radically rethinking their concept of what it takes to be an elder and the risks of doing otherwise. Part critique, part call to action, Come of Age is a love song inviting us—imploring us—to elderhood in this time of trouble. That time is now. We’re an hour before dawn, and first light will show the carnage, or the courage, we bequeath to the generations to come.

STEPHEN JENKINSON, MTS, MSW is an activist, teacher, author, and farmer. He has a master's degree in theology from Harvard University and a master's degree in social work from the University of Toronto. Formerly a hospital director and medical-school assistant professor, Jenkinson is now a sought-after workshop leader, speaker, and consultant to palliative care and hospice organizations. He is the founder of the Orphan Wisdom School in Canada, author of Die Wise, and the subject of the documentary film Griefwalker.

“This isn’t a book, it’s an agitation. A glorious rumination that gets inside words themselves and tugs adroitly at their root system, part of a wider exfoliation that holds subtle ideas close, lest they disappear in all this mud, smoke, and darkness. This isn’t a book, it’s a kind of divining, the rare breed that can leave the scriber harrowed and the reader blessed. This isn’t a book, it’s a murmuration, erudite wonderings that have wingspan and wit, turning suddenly and with elegance over the trembling acreage of our lives.”
—Dr. Martin Shaw, author of Scatterlings: Getting Claimed in the Age of Amnesia

“Stephen Jenkinson has a way of reaching right into the heart of Western culture’s dis-ease, all the while deftly rupturing and turning the English language inside out in order to do so. He traces the roots of the word elder to ‘coming to fullness’ or ‘fully realized,’ to one who may take their place among us only when the ebbing and failure of growth is admitted.”
—Ruth Jones, founder of Holy Hiatus, Wales, UK

“Jenkinson does not blame, indict, nor traffic in solution, rather he elders—with an immense love of life and the world—the long redemptive road where young and old might yet recognize each other and decide to take a little walk. Come of Age has so much respect for your willingness to pick it up that it will ask more of you than you ever thought possible; an unlikely and precious gift that may just change everything.”
—Sean Aiken, author of The One-Week Job Project

“Be you young, middle-aged, or in your time of greying, Stephen Jenkinson’s scrying into the daunting crater of what has happened to us historically, mythically, spiritually to forge today’s dominant culture with its signature malignant appetite for progress and novelty, is a much-needed missive from an uncommonly rare voice in the clamouring marketplace of protest, self-help, and innovative solutions. Come of Age attests to the tragic dearth of deep abiding regard for elderhood once traditionally recognized and prized as a sign of health and sanity in cultures that knew something of the artful ways of the world, of the Gods and of human making, a regard without which a culture goes bankrupt and becomes a menace to life and to itself. With a lucidity that is at once beautifully poetic and arresting, and with an astounding deftness tracing the signs available to us in both their unmistakable presences and absences, Jenkinson invites us to gather around the crackling fire of wonder and heartbreak where, without recourse to clever fixes, we might properly give ourselves to being awed, bewildered, and sorrowed, perhaps the preferred ground of real humility and courage. For the sake of the world, for the sake of the young, for the sake of elderhood, let this prescient book wreck you.”
—Rachelle Lamb, Nonviolent Communications (NVC) Trainer

“This book transcends ideology and platitudes and takes you deep into ancestral roots and wisdom. Jenkinson is a treasure—a raspy, nonconforming sage who has the rare ability to sneak up behind you with masterful storytelling that compels you to be troubled enough and to wonder (barely in the nick of time) if you are ready to begin to live your life as if you matter. This book brings a deeply learned, insightful, and rare perspective on navigating these troubled modern times.”
—Dana Bass Solomon, Graduated CEO, Hollyhock Centre, British Columbia, Canada

​​“If you have ever been fortunate enough to be standing by a frozen river on the days when the slightly warming temperature over the previous days has made the ice just fragile enough to finally give way to the urgent water that had been dammed upstream, you might have witnessed an analogue to this book. The cracking and groaning of the ice as the water goes from trickle to gushing flood and finding the boundaries of the banks is a marvel to see and hear. Jenkinson’s words in his newest book are that bracing, urgent, and ancient water pushing through the frozen times we might find ourselves living in. This encomium to elderhood is a slow and winding affair that gathers power and purpose and new influences as the waters roll down from an altitude to and through our lives down here.”
—Matthew Stillman, author of Genesis Deflowered​

“Come of Age is a timely, powerful exploration of the loss of elderhood in our society. Stephen has gifted us with a compelling, poetic appraisal of the loss of and need for elderhood, interwoven with poignant and sometimes painful stories and lessons. An invaluable contribution to our society that will inspire generations to come.”
—Ramona Bolton, director, Institute of Traditional Medicine

“In Come of Age, Stephen Jenkinson invites the reader to join him in a lyrical journey as he makes the case for elderhood. His luminous and erudite prose unravels the metanarrative of Western culture as it ponders time, the deep contours of Christianity, the implications of civis Romanus sum for the creation of the entity known as The West, the forgetting of place or as he puts it ‘place literacy,’ and the joy of poetry. In these wide-ranging musings, Jenkinson reveals the poverty of a culture in which people are old but not elders while breathing life into the possibility of an elder, forged by the calamities of time, who proceeds with deep courtesy as if he or she is needed.”
—Sikata Banerjee, PhD, professor of gender studies, University of Victoria

“Many of us in this modern, dominant culture of North America walk around with a deep ‘elder hunger’ but we don't recognize it as such until we meet someone willing to elder. Jenkinson makes the case that waking up to this hunger and learning how to contend with it well might be one of the most needed things in this time and place we live in. I look around me and see the hunger for convenience, efficiency, ease, freedom. and
more, but perhaps we might be better served to open the pages of this book and see if a certain relationship to this old, human hunger might help us conjure the food that the soul of our culture so desperately needs.”
—Tad Hargrave, founder, Marketing for Hippies

“We live in deeply troubled times. The biosphere is collapsing, the economy sputtering, and the mania for the ever-new continues its siren song. To whom and to what can young people turn that might still yet stand in the face of the storm? Enter Come of Age—a raucous and grief-soaked tangle through the annals of history, language, etymology, and, above all, a deep love of life. With fierce prose and unrelenting compassion, Stephen Jenkinson makes the case for elderhood in a time desperate for the wisdom that accrues to those willing to be aged, who are willing to know limitation and deep service to the ending of days.”
— Ian MacKenzie, filmmaker, Occupy Love and Amplify Her