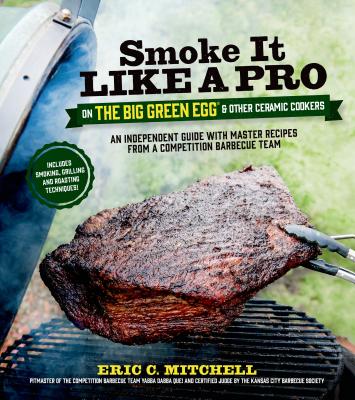 Make the Best Barbecue Out There

In Smoke It Like a Pro, barbecue pitmaster, Eric Mitchell, teaches you how to smoke, grill, roast, cure, fry and sear unbelievable, melt-in-your-mouth barbecue dishes that will blow your competition out of the water and make you the talk of the block.

He is a certified Kansas City Barbeque Society judge and was the director of the New England Barbecue Society for three terms. He has competed at both the Jack Daniel's World Championship Barbecue Invitational and the American Royal Invitational using his seven Big Green Eggs®. With his help, you'll learn to make barbecue staples like a perfectly seared steak and competition-worthy smoked pulled pork. Plus, you'll get one-of-a-kind showstoppers, like Eric's MarylandStyle Pit Beef, Coffee-Encrusted Lamb Chops and Bourbon Moxie® Meatballs. Along the way, Eric walks you through the ins-and-outs of the Big Green Egg® and other ceramic cookers, sharing lessons that will improve every meal you cook outdoors.

“If you own a Big Green Egg® or other ceramic cooker, then this cookbook is the one you need. Eric has won numerous awards and is a master at cooking on the Egg! He's going to show you things on the Egg you never dreamed of doing.” —Bill Gillespie, Grand Champion of the Kansas City Royal BBQ Competition and author of Secrets to Smoking on the Weber Smokey Mountain Cooker and Other Smokers

“Eric Mitchell is a widely acknowledged expert on the incredible versatility of the Big Green Egg®. Eric delves into all of the must-know Big Green Egg® cooking techniques and has compiled a wicked collection of tasty, creative recipes.” —Chris Hart, BBQ World Champion, author of Grill to Perfection

“Eric Mitchell is one of the most accomplished BBQ cooks I know. His skill level and expertise is unprecedented for all things Big Green Egg®. I am thrilled for him and this cookbook. It belongs in every Eggheads’ house—mine included.” —Chris Hart, BBQ World Champion, author of Grill to Perfection

“I can't think of anyone more knowledgeable about the Big Green Egg® than Eric Mitchell.” —Scottie Johnson, World Champion pitmaster of CancerSucksChicago.com

“Within these pages, experienced Egger, Eric Mitchell, hits just about every aspect of cooking on the versatile Egg. Complemented by drool-inducing photographs by Ken Goodman, this book is sure to elevate anyone's cooking. I already have some ideas for stepping up my game!” —Chris Capell, Dizzy Pig BBQ Company