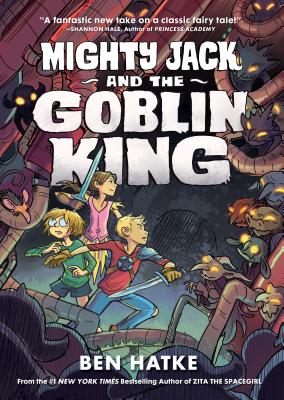 This is book number 2 in the Mighty Jack series.

Like a bolt from the blue, Jack's little sister Maddy is gone—carried into another realm by an ogre.

When Jack and Lilly follow Maddy’s captor through the portal, they are ready for anything . . . except what they find waiting for them in the floating crossroads between worlds. Even the power of their magic plants may not be enough to get them back to earth alive.

Alone and injured, Jack and Lilly must each face their own monsters—as well as giants who grind the bones of human children to feed their “beast” and a fearsome goblin king in the sewers down below.

But when Jack finds himself in a tough spot, help comes from the most unlikely person: the goblin king!

Ben Hatke, the #1 New York Times–bestselling author of Zita the Spacegirl, concludes his latest middle-grade fantasy-adventure graphic novel series, Mighty Jack, with the energetic finale to his retelling of Jack and the Beanstalk.

Ben Hatke is the author and illustrator of the New York Times–bestselling Zita the Spacegirl trilogy, the picture books Julia's House for Lost Creatures and Nobody Likes a Goblin, and the graphic novels Little Robot and Mighty Jack. He lives and works in the Shenandoah Valley with his wife and their boisterous pack of daughters.

"Expect demand for the next installment to be through the roof; Hatke's brilliant finalscene should elicit audible exclamations from fans of his work. Anotheroutstanding adventure from a master storyteller." —Kirkus, starred review

"The ending is an awesome surprise for Hatke fans, bringing much of his work together in one final scene, and it will ensure they will excitedly wait to follow Jack and co. on their next adventure" —BCCB

"Full-bleedpages with hordes of fantastic monsters rendered in wild, organic shapes, and he further enlivens the story with snappy, comical dialogue." —Booklist

"VERDICT An excitingconclusion to a modern-day take on “Jack and the Beanstalk,” this title is evenstronger than the previous book. Highly recommended for libraries where thefirst installment is popular" —SLJ