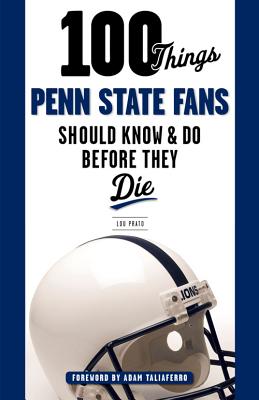 Perfect for Penn State fans who think they already know everything

With traditions, records, and Nittany Lions lore, this lively, detailed book explores the personalities, events, and facts every Penn State fan should know. It contains crucial information such as important dates, player nicknames, memorable moments, and outstanding achievements by singular players. From trivia on legendary players—such as John Cappelletti, Kerry Collins, Larry Johnson, LaVar Arrington, and Paul Posluszny—to knowing the best places to catch a game, 100 Things Penn State Fans Should Know & Do Before They Die is the ultimate resource guide for true fans of the Nittany Lions.

Lou Prato is a veteran journalist who covers Penn State sports for various magazines, including two publications dedicated to Penn State football, Blue White Illustrated and Fight On State magazine. He is the author or coauthor of several other books about Penn State football, including Game Changers: Penn State, The Penn State Football Encyclopedia, and What It Means to Be a Nittany Lion. He was hired by Penn State to help organize and start the Penn State All-Sports Museum and became the museum's first director. He lives in Centennial Hills, Pennsylvania. Adam Taliaferro was a top recruit at Penn State, where he earned playing time as a true freshman in 2000. Early in his college career as a cornerback, Taliaferro suffered a career-ending spinal cord injury while making a tackle in a game. Amazingly, Taliaferro, who was paralyzed on the hit, learned to walk again after eight months of rehab. Today, Taliaferro is a member of the New Jersey General Assembly and lives in Woolwich Township, New Jersey.