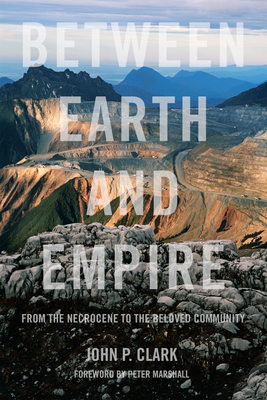 Between Earth and Empire focuses on the crucial position of humanity at the present moment in Earth History. We have left the Cenozoic, the “new period of life,” and are now in the midst of the Necrocene, a period of mass extinction and reversal. It is argued that an effective response to global crisis requires attention to all major spheres of social determination, including the social institutional structure, the social ideology, the social imaginary, and the social ethos. In this wide-ranging and ruthlessly compassionate critique, John P. Clark explores examples of significant progress in this direction, including the Zapatista movement in Chiapas, the Democratic Autonomy Movement in Rojava, indigenous movements in defense of the commons, the solidarity economy movement, and efforts to create liberated base communities and affinity groups within anarchism and other radical social movements. In the end, the book presents a vision of hope for social and ecological regeneration through the rebirth of a libertarian and communitarian social imaginary, and the flourishing of a free cooperative community globally.

John P. Clark is a philosopher, activist, and educator. He is Director of La Terre Institute for Community and Ecology, and he is the author or editor of many books, including The Anarchist Moment; Anarchy, Geography, Modernity; and The Impossible Community. Peter Marshall is a historian, philosopher, travel writer, and poet. He has written 16 books, including Demanding the Impossible, William Godwin, and The Philosopher’s Stone.

“Whether in Rojava where women are fighting for their peoples’ survival, or in the loss and terror of New Orleans after the Katrina flood, Clark finds models of communality, care, and hope. Finely reasoned and integrative, tracing the dialectical play of institution and ethos, ideology and imaginary, this book will speak to philosophers and activists alike.” — Ariel Salleh, author of Ecofeminism as Politics


“John Clark's book is a measured manifesto. It is a must-read for any activist or scholar concerned about the alternatives to capitalism's ongoing war on nature.” — Andrej Grubacic, coauthor of Living at the Edges of Capitalism

“Clark presents very sophisticated philosophical concepts in a style that is quite comprehensible to the general public. Each page sheds new light on our age of planetary turbulence and demolishes all pseudo-truths about it.” — Ronald Creagh, author of American Utopias

“This book is a compass, polarized in the superlative sub-tropiques of the Gulf Coast, orienting cardinal points in the landscapes of the Zapatistas, the Black Panther Party, the Kurdish Freedom Movement, and West Papua. The diamantine dialectics of freedom, which breathes through the pages of this book, will be a decisive factor in the final battles between earth and empire, between evolution and extinction. Which side are you on?” — Quincy Saul, cofounder of Ecosocialist Horizons, and editor of Maroon Comix

"The book is breathtaking in breadth, but there is a singular message: while humans brought the Earth to the brink, there remains hope that the planet and its creatures will be able to reassert themselves. May Clark’s sobering assessment of the current state of humanity’s relationship to the world be taken to heart." — Barry Silverstein, Forward Reviews

"Clark is an eco-anarchist philosopher and prolific writer on radical ecology issues. This collection of essays (some new, some previously published) ranges across a wide variety of grassroots responses to the coming ‘necrocene,’ i.e., the human-caused mass extinction of biodiversity already under way. Humans can still save the planet, he writes, by adopting a truly human-centered bioregional and anarchist way of life. The Paris Agreement, the Zapatista communities of Chiapas, the Rojava movement rising out of Syria’s ashes, Zen and Sufism, situationism and the lessons of the 1968 student revolt in France, the Black Panthers—all offer critical lessons for organizers and activists seeking Clark's ‘beloved community.’ In particular for Clark, a New Orleans native, the aftermath of Hurricane Katrina demonstrates problems as well as solutions. Some readers will be put off by the frequent allusions to mystical and religious ideas, but Clark’s point is that Earth’s desperate situation requires drawing on all possible solutions. Despite the dark warnings, Clark offers hope for a future—though not Utopian—world of decentralized, libertarian, and ecologically sane communities." — T. S. Martin, choiceconnect.org