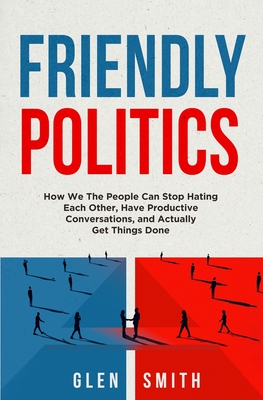 A Science-Based Approach to Fixing Our Political System

How can We the People stop hating each other, have productive conversations, and actually get things done?

If you've caught even a glimpse of cable news lately, you might be convinced that the end of democracy is just around the corner. And whether your political views fall on the left, right, or somewhere in the middle, there's a good chance at least some part of your life has been negatively impacted by politics.

The fictional narrative that Americans are divided up into red and blue has led to mistrust and disgust even though we have a lot more in common than we think. This misguided narrative has already torn apart far too many initiatives, friendships, and even families. It's time for us to reconnect with our true values, with each other, and with our political system.

By adopting the practical science-based life lessons from Friendly Politics, you can learn to feel less anxious about the political climate while improving your relationships and having more productive conversations, whether you're discussing politics or not. And who knows? You might grow to enjoy talking to Uncle Frank at Thanksgiving.

Readers who enjoyed Talking to Strangers by Malcolm Gladwell, Love Your Enemies by Arthur C. Brooks, and Why We're Polarized by Ezra Klein will find Friendly Politics an insightful and refreshing addition to their libraries.