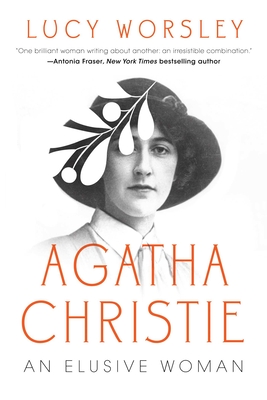 A new, fascinating account of the life of Agatha Christie from celebrated literary and cultural historian Lucy Worsley.

"Nobody in the world was more inadequate to act the heroine than I was."

Why did Agatha Christie spend her career pretending that she was “just” an ordinary housewife, when clearly she wasn’t?  Her life is fascinating for its mysteries and its passions and, as Lucy Worsley says, "She was thrillingly, scintillatingly modern."  She went surfing in Hawaii, she loved fast cars, and she was intrigued by the new science of psychology, which helped her through devastating mental illness.

So why—despite all the evidence to the contrary—did Agatha present herself as a retiring Edwardian lady of leisure?

She was born in 1890 into a world that had its own rules about what women could and couldn’t do. Lucy Worsley’s biography is not just of a massively, internationally successful writer. It's also the story of a person who, despite the obstacles of class and gender, became an astonishingly successful working woman.

With access to personal letters and papers that have rarely been seen, Lucy Worsley’s biography is both authoritative and entertaining and makes us realize what an extraordinary pioneer Agatha Christie was—truly a woman who wrote the twentieth century.

Lucy Worsley OBE is Chief Curator at the charity Historic Royal Palaces. She also presents history documentaries for the BBC. Her bestselling books include Queen Victoria; Jane Austen at Home; The Art of the English Murder; and If Walls Could Talk: An Intimate History of the Home. In 2019, her BBC One program Suffragettes with Lucy Worsley won a BAFTA. She lives in England.

“Agatha Christie was a modernist, an iconoclast, and a groundbreaker, according to this excellent biography from historian Worsley. Worsley offers close readings of Christie’s work and presents a careful reframe of the novelist’s famous 1926 disappearance. Drawing on personal letters and modern criticism, Worsley manages to make her subject feel fresh and new. This is a must-read for Christie fans.”
— Publishers Weekly, (starred review)

“Presenting Christie as living a ‘modern life,’ firmly in and ‘of her time’ is Dr. Worsley’s key aim: neither nostalgic nor part of the heritage industry. She succeeds brilliantly, for the Agatha Chirstie (woman and author) that emerges from this astute and, at times, justifiably compassionate book is anything but cosy.”
— Country Life (UK)

"Worsley comes up with another winner in this sprightly, endearing biography. Agatha Christie was elusive, Worsley argues, because she 'deliberately played upon the fact that she seemed so ordinary.' Worsley also shows how Christie took care to create narratives that put 'the lives of women centre stage' as well as how her personal experiences informed her work One of Christie’s gifts, writes Worsley, was to 'democratise the Gothic.'  While building a devoted audience, she was also breaking new ground.  Throughout, Worsley takes us behind the scenes to reveal classic 'Christie tricks' from her books. With great affection, Worsley masterfully maneuvers her way through Christie’s life and prolific oeuvre."

"In the best biography of Agatha Christie ever written, Lucy Worsley gets to the soul—the complex, troubled, but big soul—of our greatest whodunnit writer with laser-like precision. There will not now need to be another biography of the queen of the detective story written for decades."
— Andrew Roberts, New York Times bestselling author of Churchill: Walking with Destiny

"This is a warm, intelligent book that does justice both to Agatha Christie's character and to her distinctive genius as a writer of plays and novels. Someone once said that the greatest character Agatha Christie ever invented was Agatha Christie herself. If that's true, she was waiting for the perfect biographer to bring her back to life, and she has found her in Dr. Lucy Worsley."
— A. N. Wilson

"Lucy Worsley brings Agatha Christie back to life, revealing a strong, pioneering, highly intelligent woman whose detective novels rank among the best ever written. Worsley shows us Christie's faults and flaws in the context of her time; she evokes her houses, clothes and the central mystery of her life in spritely sentences with a sharp ear for dialogue. Reading Worsley is as enjoyable as reading Christie herself."
— Ruth Scurr, author of A Life Told in Gardens and Shadows

"Lucy Worsley's biography of Agatha Christie is as unputdownable as any of the novels by the Queen of Crime herself. Gripping, revealing, and ultimately extremely moving, Agatha Christie is a wonderful tribute to one of the best-loved writers of the twentieth century."
— Amanda Foreman, New York Times bestseller author

"In the best biography of Agatha Christie ever written, Lucy Worsley gets to the soul—the complex, troubled, but big soul—of our greatest whodunnit writer with laser-like precision. There will not now need to be another biography of the queen of the detective story written for decades."
— Andrew Roberts, New York Times bestselling author of Churchill: Walking with Destiny