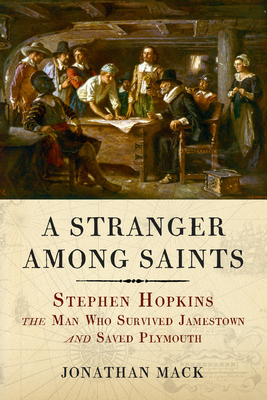 Sometime between 1610 and 1611, William Shakespeare wrote The Tempest. The idea for the play came from the real-life shipwreck in 1609 of the Sea Venture, which was caught in a hurricane and grounded on the coast of Bermuda during a voyage to resupply England’s troubled colony at Jamestown, in present-day Virginia.

A lesser known passenger was Stephen Hopkins. During the ten months the Sea Venture passengers were marooned on Bermuda, Hopkins was charged with trying to incite a mutiny and condemned to die, only to have his sentence commuted moments before it was to be carried out. In 1620, Hopkins signed on to another colonial venture, joining a group of religious radicals on the Mayflower.

The Pilgrims encountered their own tempest, a furor that started when they anchored off Cape Cod and lasted for their first twelve months in the New World. Disease and sickness stole nearly half their number, and their first contacts with the Indigenous Americans were contentious.

The entire enterprise hung in the balance, and it was during these trials that Hopkins became one of the expedition’s leaders, playing a vital role in bridging the divide of suspicion between the English immigrants and their Native neighbors.

Jonathan Mack is an attorney and is an official member of the General Society of Mayflower Descendants. He is a graduate of Harvard Law School and lives in the San Diego area.

“Jonathan Mack has written an unforgettable story of Stephen Hopkins and how his indenture of seven years at Jamestown later helped in the settlement of Plymouth Colony. Bit by bit, Mack extracts from early extant writings an intimate and insightful account of Stephen Hopkins of the Mayflower. Mack tells of Hopkins’s critical role as liaison between the Pilgrims and the Wampanoag tribe with new insight and intimate detail. If you think you knew the story but wish for more, this deeper understanding of Hopkins and his service in the founding of Plymouth Colony will delight you.” —Linda Longley, Historian, California Mayflower Society

“We didn’t know enough about Stephen Hopkins, whose enterprising spirit and rapport with Native Americans contributed to the nation’s founding. Mack fills the gap with tireless research and storytelling skills, bringing a complex historical figure to life.” —Amy Finnerty, Culture Writer and Editor