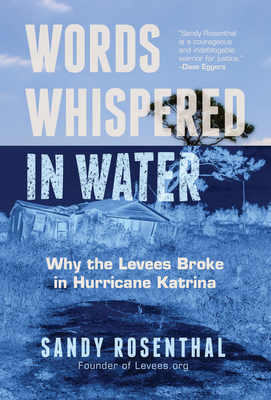 Rosenthal employs the surgical precision of an investigative journalist and the craft of a memoirist to expose the flaws, natural and human, behind the devastation caused by Hurricane Katrina. --The Eric Hoffer Award Program

In the aftermath of one of the worst disasters in U.S. history, Words Whispered in Water tells the story of one woman's fight--against all odds--to expose a mammoth federal agency--and win.

It's a horror story, a mystery, and David and Goliath story all in one. In 2005, the entire world watched as a major U.S. city was nearly wiped off the map. The levees ruptured and New Orleans drowned. But while newscasters attributed the New Orleans flood to "natural catastrophes" and other types of disasters, citizen investigator Sandy Rosenthal set out to expose the true culprit and compel the media and government to tell the truth. This is her story.

When the protective steel flood-walls broke, the Army Corps of Engineers--with cooperation from big media--turned the blame on natural types of disasters. In the chaotic aftermath, Rosenthal uncovers the U.S. corruption, and big media at root. Follow this New Orleans hero as she exposes the federal agency's egregious design errors and eventually changes the narrative surrounding the New Orleans flood. In this engaging and revealing tale of man versus nature and man versus man, Words Whispered in Water proves that the power of a single individual is alive and well.

If you enjoyed books like The Johnstown Flood, Breach of Faith, or The Great Deluge, then Words Whispered in Water is your next read