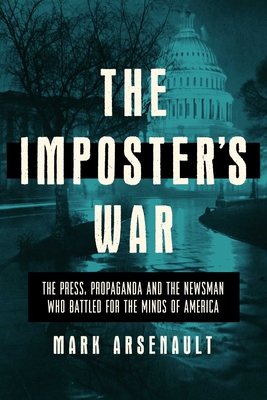 The shocking history of the espionage and infiltration of American media during WWI and the man who exposed it. A man who was not who he claimed to be...

Russia was not the first foreign power to subvert American popular opinion from inside. In the lead-up to America’s entry into the First World War, Germany spent the modern equivalent of one billion dollars to infiltrate American media, industry, and government to undermine the supply chain of the Allied forces. If not for the ceaseless activity of John Revelstoke Rathom, editor of the scrappy Providence Journal, America may have remained committed to its position of neutrality. But Rathom emerged to galvanize American will, contributing to the conditions necessary for President Wilson to request a Declaration of War from Congress—all the while exposing sensational spy plots and getting German diplomats expelled from the U.S.

And yet John Rathom was not even his real name. His swashbuckling biography was outrageous fiction. And his many acts of journalistic heroism, which he recounted to rapt audiences on nationwide speaking tours, never happened. Who then was this great, beloved, and ultimately tragic imposter?

In The Imposter’s War, Mark Arsenault unearths the truth about Rathom’s origins and revisits a surreal and too-little-known passage in American history that reverberates today.

The story of John Rathom encompasses the propaganda battle that set America on a course for war. He rose within the editorial ranks, surviving romantic scandals and combative rivals, eventually transitioning from an editor to a de facto spy. He brought to light the Huerta plot (in which Germany tied to push the United States and Mexico into a war) and helped to upend labor strikes organized by German agents to shut down American industry.

Rathom was eventually brought low by an up-and-coming political star by the name of Franklin Delano Roosevelt. Arsenault tracks the rise and fall of this enigmatic figure, while providing the rich and fascinating context of Germany’s acts of subterfuge through the early years of World War I.

The Imposter's War is a riveting and spellbinding narrative of a flawed newsman who nevertheless changed the course of history.

Mark Arsenault has covered national politics, gambling, and worked on Spotlight Team investigations as a staff reporter for the Boston Globe, which won a Pulitzer Prize for its coverage of the Boston Marathon bombing. This is his first nonfiction book.

“World War I German skulduggery combined with the biography of a flamboyant newspaper editor who trumpeted it. John Rathom (1868-1923) became famous, but Arsenault’s research reveals him as a fraud. Rathom was quickly forgotten, but Arsenault does readers a favor by reviving his memory.”
— Kirkus Reviews

“In this superb debut, Pulitzer Prize–winning journalist Arsenault tells the stranger-than-fiction story of the efforts of John Rathom (1868–1923), the Australian-born editor of the Providence Journal, to shift American attitudes toward involvement in WWI. His eye-opening account, which also covers a Navy scandal that could have derailed FDR’s political career, is a valuable look at both the ethics of journalism that prioritizes the ends over the means and century-old antecedents for foreign propaganda disseminated as part of a sophisticated scheme. Enthralling.”
— Publishers Weekly (starred)

“Arsenault has a wonderful time sharing the story of how he nailed down details of Rathom’s life that bore no resemblance to the versions he peddled. [Arsenault writes] with considerable panache.”
— Washington Post

“In his first nonfiction book, Boston Globe reporter Arsenault not only resurrects Rathom and uncovers the surprising secret of his true background but also provides a complete sense of the world in which Rathom lived. Well researched and clearly written, this book provides insights into journalism and parts of American history that still resonate.”
— Booklist

“Mark Arsenault has crafted a most unusual war story—a fast-moving tale populated by spies, fakers, double-dealers, maneuvering diplomats and vengeful political figures. At the heart of this twisty saga of Great Powers politics sits John R. Rathom, a U.S. newspaper editor with a false identity who tossed journalistic ethics to the wind in his zeal to push the country into World War I against Germany. Arsenault employs meticulous research and a breezy story-telling style to lay bare the scope of Rathom’s brazenly deceptive campaign—and he offers a vivid look at the propaganda war that raged long before American troops would tread the battlefields of Europe. The Imposter’s War adds to the wider narrative about World War I a character of intrigue and towering ambition not soon to be forgotten.”
— Ken Ellingwood, author of First to Fall: Elijah Lovejoy and the Fight for a Free Press in the Age of Slavery

"In The Imposter’s War, Mark Arsenault weaves a spellbinding tale of intrigue, espionage and the spies, propagandists and conmen who helped propel a reluctant United States into World War I. At the center was an unlikely figure, John Rathom, a flamboyant newspaperman in Providence, Rhode Island whose life was a lie. Arsenault does an amazing job excavating the shocking truth about the Australian’s origins and bringing to life a turbulent America in the early 20th Century. A historic page-turner!"


— Mike Stanton, Pulitzer Prize winner and bestselling author of The Prince of Providence and Unbeaten