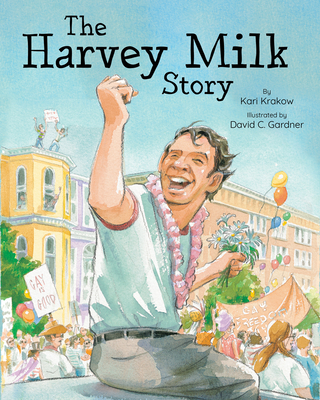 A hopeful and inspiring biography of the historic gay activist Harvey Milk, who gave people the courage to be proud of who they are.

On a rainy day in January, on the steps of San Francisco's City Hall, Harvey Milk was sworn into office, the first openly gay elected official in the United States of America. Harvey Milk had made history.

From his childhood on Long Island, through college, his service with the Navy, and years as a schoolteacher, Harvey Milk was always popular, intelligent, and energetic. But he was also hiding a secret: He was gay. He eventually moved to San Francisco, where there was a strong LGBTQ community and he could be free to be himself. As he talked to people in his neighborhood, he realized many people who were usually ignored by the government deserved better protection: gay, lesbian, and transgender people, people of color, people with disabilities, and more. He decided to run for public office, and eventually won election to the city's Board of Supervisors. Though his career as a public servant was sadly and suddenly cut short, his pride as an openly gay man and his passion for equality has inspired countless people to continue his work. Harvey's legacy is everywhere today, especially in the hundreds of openly gay elected officials in every level of government.

One of the first picture book biographies for children about a gay leader, this is a perfect introduction to one of the most important figures in the fight for LGBTQ civil rights. Backmatter includes further details about the struggles faced by different groups mentioned in the story, other sources readers can turn to for more information about Harvey, and more books about LGBTQ+ history.

Kari Krakow grew up in East Aurora, New York and now lives in Ithaca, New York with her family. A teacher for forty years, she believes biographies help children learn that individuality can be a source of strength. She hopes The Harvey Milk Story will inspires children to be themselves and make the world a better place. David C. Gardner grew up loving picture books, puppets, and cartoons, and now has three decades of experience as a professional illustrator. He's been the illustrator of many books for children including The Harvey Milk Story, Sarah Gives Thanks, and Write On, Irving Berling! He also worked on movies like Beauty and the Beast as an artist at Walt Disney Animation Studios. He studied filmmaking at Northwestern University and illustration at the American Academy of Art. He now lives in Sarasota, Florida and teaches at Ringling College of Art & Design. You can visit him at www.flyingdogstudio.com.