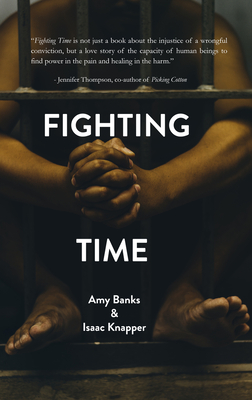 The evening of April 12,1979 was clear and warm. Unaware of the danger lurking on the periphery of the French Quarter, Drs. Ronald Banks and John Hakola made a tragic decision – to walk the few blocks from the historic district to the Hyatt Regency. Inches from the safety of their hotel entrance they were accosted by two young men – a scuffle ensued, a shot fired, Dr. Banks lay dead on the sidewalk. Fighting Time tells the story of what happened next - hours, days, weeks and years after those horrible seconds. Isaac Knapper, a sixteen-year-old boy from a nearby housing project was wrongfully convicted of the murder and sentenced to life in prison without parole in the Louisiana State Penitentiary, Angola. As the time passed, Amy, Dr. Banks’s middle daughter and now a psychiatrist and trauma specialist, realized it was time to unpack her own family trauma. When Isaac was exonerated and released from prison, Amy traveled to New Orleans to meet the man wrongfully convicted of killing their father. FIGHTING TIME is the powerful true story of two families whose lives became entangled in a moment of trauma and is told with empathy, vulnerability, and grace.

Amy Banks MD, a Harvard trained psychiatrist and Founding Scholar of the International Center for Growth in Connection, is the author of Wired to Connect: The Surprising Link Between Brain Science and Strong, Healthy Relationships and a member of the Clinical Advisory Board at the Renfrew Center for Eating Disorders. She has lectured nationally and internationally on Relational Neuroscience and maintains a psychiatric practice in Lexington, MA treating the sequelae of chronic disconnections and abuse. Isaac Knapper, head trainer of the Crescent City Boxing Gym in NOLA, is passionate about helping kids avoid the trauma he experienced in the justice system that wrongfully convicted him of murder as a teenager. Sentenced to life in prison without parole, Knapper boxed for his life holding the Department of Corrections boxing title for 9 years while in Angola. After his exoneration he boxed professionally. He has five adult children and lives in NOLA with his wife, Denise.

“Amy Banks and Issac Knapper heartbreakingly tell their stories of two families, whose lives intersect one night in April 1979 and unfold a series of events that reshaped their lives forever. Blended together, much like a catastrophic earthquake, they spend the next three decades trying to find anything salvageable from their former lives. Fighting Time is not just a book about the injustice of a wrongful conviction, but a love story of the capacity of human beings to find power in the pain and healing in the harm.” —Jennifer Thompson, co-author of the bestselling Picking Cotton

“Fighting Time is a brave and necessary book. It is a book that pushes the reader beyond thin and familiar abstractions about social justice and systemic oppression.  In this book, Dr. Amy Banks and Mr. Isaac Knapper put flesh and bone and spirit onto institutional practices and social behaviors designed to lock inequalities in place, thus perpetuating the chronic disconnections that corrode the human spirit. There are some books that make it impossible to “not know.” Fighting Time is such a book. One enters into the book and is confronted with questions that can only be answered by radical engagement with the life of those we call Other and by confronting the illusions and denials that comprise what is called Self. The reward is a renewed claim on human dignity, a strengthened commitment to social justice, and perhaps a revisioning of human possibility.” —Maureen Walker PhD, author of When Getting Along is Not Enough: Reconstructing Race in Our Lives and Relationships (2019, Teacher’s College Press)

“Racial inequalities permeate every aspect of our culture and Fighting Time reminds us how those inequities affect our perspectives, experiences, and life outcomes. It reflects how little has changed when it comes to the treatment of our most underserved and vulnerable populations and how grief and loss can bring divided communities and people together. Fighting Time reminds the reader of the importance of seeing past zip code, skin color, education and age, factors our unjust systems are created to reward or punish. In this book, Banks and Knapper tell the story of two grieving families who both lost so much but through their unique connection and storytelling have healed not only themselves but their community. This book will challenge its readers to see the justice system with a deeper understanding and a greater sensitivity to its inherent inequities. Fighting Time will inspire its readers to build a movement of connection, forgiveness and change.” —Inderjit (Vicky) Basra, President/CEO of Delores Barr Weaver Policy Center, Jacksonville, FL

"This is an incredible story, a memoir of trauma in two voices, each wounded, each courageous, and each inviting us into a story of healing and recovery. This book is a deep dive into the worlds of mental health and social justice that demonstrates their inseparable connection." —Anne Hallward MD, Host of Safe Space Radio