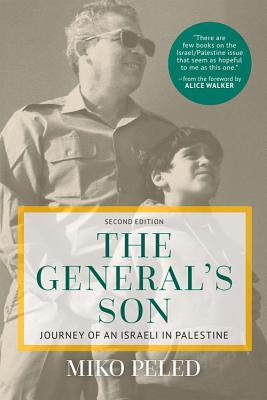 A powerful account, by Israeli peace activist Miko Peled, of his transformation from a young man who'd grown up in the heart of Israel's elite and served proudly in its military into a fearless advocate of nonviolent struggle and equal rights for all Palestinians and Israelis. His journey is mirrored in many ways the transformation his father, a much-decorated Israeli general, had undergone three decades earlier. Alice Walker contributed a foreword to the first edition in which she wrote, "There are few books on the Israel/Palestine issue that seem as hopeful to me as this one."  In the new Epilogue he takes readers to South Africa, East Asia, several European countries, and the West Bank, Gaza, and Israel itself.

Miko Peled is an Israeli peace activist who spends his time between Jerusalem and San Diego. Born into a strongly Zionist family in Jerusalem, as a young man Peled witnessed the transformation of his father, Gen. Matti Peled, from a well-known leader in Israel's military to a strong peace activist. The General's Son has been translated into numerous other languages and Peled, a gripping public speaker, has lectured around the world in his campaign to promote justice, democracy, and equal rights for Palestinians and Israelis. Alice Walker is an activist and a Pulitzer Prize winning author. She has written more than 30 books, including The Color Purple, The Temple of My Familiar, and The Way Forward is With a Broken Heart.

"A fascinating story that provides much food for thought."—Uri Avnery, Former Member of Knesset and veteran peace activist

"Miko is truly inspiring in the telling of his family's story, and of his own struggles to live up to the moral, ethical, and intellectual legacy from his father."—Landrum Bolling, former President, Earlham College

"We are privileged to accompany the author on his journey of self-education... culminating in poignant advcacy of a unitary binational state anchored in common humanity"—Walid Khalidi, General Secretary, Institute for Palestine Studies


"Out of personal pain and sober reflection on the past comes this powerful narrative of transformation... [A] must-read for anyone who has not lost hope that one day peace and justice will prevail in Israel and Palestine."—Ilan Pappé, Israeli historian


"The story of Miko Peled, his mother and father, reveals how facts, compassion and a universal sense of justice took hold and inspires this energetic and informed voice for peace." —Ralph Nader

"This critically important memoir by Miko Peled, a writer and citizen at the dynastic heart of Israel's identity, is a must-read for anyone, Jewish or not, who cares about our collective evolution to a more peaceful and compassionate world. Brave, honorable and engaging work." —Naomi Wolf

“This is a brilliantly rendered father-and-son saga amidst a background that evokes Greek mythology….a story of admiration—and anger.” —Seymour Hersh

"Exceptionally well written, organized and presented, The General's Son is an extraordinary read from beginning to end and especially recommended for inclusion into community and academic library collections." —Paul Vogel, Midwest Book Review

"This critically important memoir by Miko Peled, a writer and citizen at the dynastic heart of Israel's identity, is a must-read for anyone, Jewish or not, who cares about our collective evolution to a more peaceful and compassionate world. Brave, honorable and engaging work." —Naomi Wolf, author and social critic

“This is a brilliantly rendered father-and-son saga amidst a background that evokes Greek mythology . . . . a story of admiration—and anger.” —Seymour Hersh, American investigative journalist