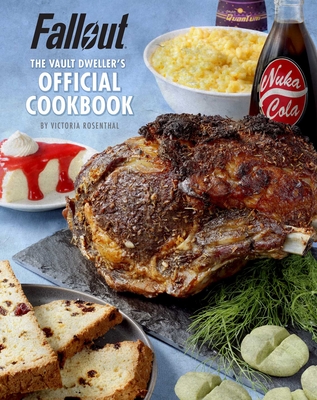 Craft your own glass of Nuka-Cola, a bowl of BlamCo Mac & Cheese, and more with the recipes in Fallout: The Official Cookbook.

Based on the irradiated delicacies of the world of Bethesda Entertainment’s Fallout, this Vault-Tec–approved cookbook provides fans of the award-winning series with recipes inspired by their favorite Fallout foods. Whip up tasty versions of the Mirelurk egg omelette, throw some deathclaw meat on the grill, and re-create BlamCo Mac & Cheese with Fallout: The Official Cookbook.

Victoria Rosenthal launched her blog, Pixelated Provisions, in 2012 to combine her lifelong passions for video games and food by recreating consumables found in many of her favorite games. When she isn't experimenting in the kitchen and dreaming up new recipes, she spends time with her husband and corgi hiking, playing video games, and enjoying the latest new restaurants. Victoria is also the author of Fallout: The Vault Dweller's Official Cookbook, Destiny: The Official Cookbook, Street Fighter: The Official Street Food Cookbook, and The Ultimate FINAL FANTASY XIV Cookbook. Feel free to say hello on Twitter, Twitch, or Instagram at PixelatedVicka.

"With this new cookbook, you’re going to be able to throw the absolute best release party for Fallout 76"
— Nerdist

"This book is fantastic"
— IGN

"The pre-bomb published book states its intention of encouraging healthy and flavorful cuisine 'regardless of the apocalyptic circumstance.'”
— Gluttonous Geek