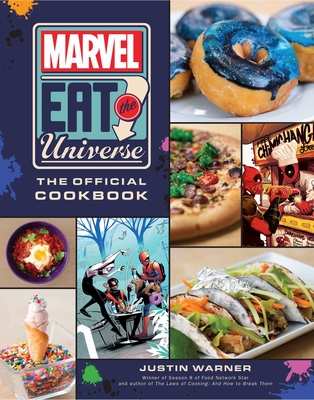 "If there’s a Marvel fan in your life who cooks even occasionally, they need this" - Laughing Place

Feast your way through the world of Marvel Comics with celebrity chef Justin Warner in Marvel Eat the Universe: The Official Cookbook.

Prepare to eat like a Marvel Super Hero with Marvel Eat the Universe: The Official Cookbook. Chef Justin Warner invites you to pull up a chair and explore the Marvel Universe through these creative dishes inspired by Marvel's heroes.

Based on Marvel’s hit digital series hosted by Warner, this ultimate compendium of recipes will feature dishes that span a variety of skill levels including:


With sixty recipes inspired by Marvel Comics’ rich history, Marvel Eat the Universe: The Official Cookbook offers something delicious for fans from every corner of the multiverse.

JUSTIN WARNER is the winner of Food Network Star Season 8, the author of the cookbooks The Laws of Cooking: And How to Break Them and The Ultimate Ninja Foodi Pressure Cooker Cookbook, and the former chef and co-owner of Michelin-rated Do or Dine restaurant in Brooklyn, New York. His first Food Network appearance was on 24 Hour Restaurant Battle in 2010, and he continues to be a frequent guest on Food Network shows like Guy's Grocery Games, Cutthroat Kitchen, and Tournament of Champions. Justin hosts Food Network’s Foodie Call, as well as Marvel Eat the Universe, a digital series for Marvel. In his free time he plays video games and hikes with his gal, Brooke, and plays fetch with his dog, Kewpie. Justin lives in Rapid City, South Dakota.