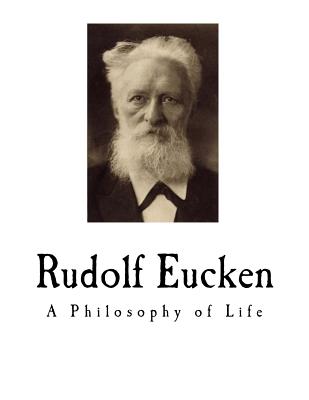 Rudolf Eucken: A Philosophy of Life by Abel J. Jones. Rudolf Christoph Eucken; 5 January 1846 - 15 September 1926) was a German philosopher. He received the 1908 Nobel Prize for Literature "in recognition of his earnest search for truth, his penetrating power of thought, his wide range of vision, and the warmth and strength in presentation with which in his numerous works he has vindicated and developed an idealistic philosophy of life", after he had been nominated by a member of the Swedish Academy. Before we proceed to outline Eucken's philosophical position, it will be well if we can first be clear as to the special problem with which he concerns himself. Philosophers have at some time or other considered all the problems of heaven and earth to be within their province, especially the difficult problems for which a simple solution is impossible. Hence it is, perhaps, that philosophy has been in disrepute, especially in English-speaking countries, the study of the subject has been very largely limited to a small class of students, and the philosopher has been regarded as a dreamy, theorising, and unpractical individual. Many people, when they hear of Eucken, will put him out of mind as an ordinary member of a body of cranks. From Eucken's point of view this is the most unfortunate thing that can happen, for his message is not directed to a limited number of advanced students of philosophy, but is meant for all thinking members of the human race. The problem he endeavours to solve is far from being one of mere theoretical interest; on the contrary it has to do with matters of immediate practical concern to the life of the individual and of the community. To ignore him will be to fail to take account of one of the most rousing philosophies of modern times.