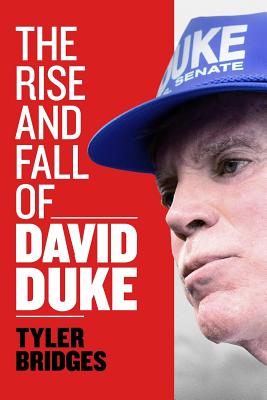 On Our Shelves Now.
(This book cannot be returned.)

This is an update of a 1994 biography of David Duke, the country's most notorious racist and anti-Semite. The original book charted his political rise when he became a household name by championing white rights while running for governor in Louisiana. The updated version features a new title reflecting Duke's new political reality. It also includes four new chapters that outline Duke's political fall at the same time that the emergence of Donald Trump has given the former Klan grand wizard new visibility. The final chapter describes Duke's role in the 2017 Charlottesville protest. Duke may no longer count on widespread political support, but the Republican Party, led by Trump, has embraced many of the ideas that he pushed in the early 1990s during his political heyday.

Tyler Bridges, twice a member of Pulitzer Prize-winning teams, is a journalist based in New Orleans who reports on Louisiana politics for the Baton Rouge/New Orleans Advocate. He also free-lances for such publications as Politico Magazine. He is the author of three books on Louisiana politics: Long Shot: A Soldier, a Senate, a Serious Sin, an Epic Louisiana Election (Lisburn Press, 2016); Bad Bet on the Bayou: The Rise of Gambling in Louisiana and the Fall of Governor Edwin Edwards (Farrar, Straus & Giroux, 2002); and The Rise of David Duke (University Press of Mississippi, 1994). He was a 2011-12 Nieman Fellow at Harvard, was awarded Columbia University's Maria Moors Cabot Award in 2010 for his 10 years of foreign reporting in South America and was a Fall 2017 Fellow at Harvard's Shorenstein Center on Media, Politics and Public Policy. A native of Palo Alto, Tyler is a graduate of Stanford.