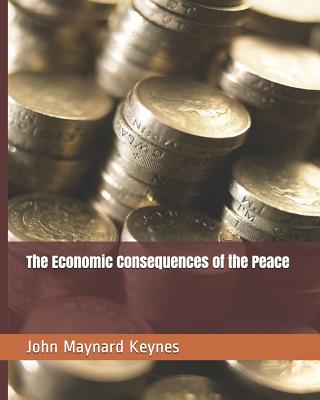 By John Maynard Keynes
$9.31
Email or call for price

The Economic Consequences of the Peace (1919) is a book written and published by the British economist John Maynard Keynes. After the First World War, Keynes attended the Paris Peace Conference of 1919 as a delegate of the British Treasury. In his book, he argued for a much more generous peace, not out of a desire for justice or fairness - these are aspects of the peace that Keynes does not deal with - but for the sake of the economic well-being of all of Europe, including the Allied Powers, which the Treaty of Versailles and its associated treaties would prevent.The book was a best-seller throughout the world and was critical in establishing a general opinion that the treaties were a "Carthaginian peace" designed to crush the defeated Central Powers, especially Germany. It helped to consolidate American public opinion against the treaties and against joining the League of Nations. The perception by much of the British public that Germany had been treated unfairly was, in turn, a crucial factor in later public support for the appeasement of Hitler.The success of the book established Keynes' reputation as a leading economist, especially on the left. When Keynes was a key player in establishing the Bretton Woods system in 1944, he remembered the lessons from Versailles as well as the Great Depression. The Marshall Plan, which was promulgated to rebuild Europe after the Second World War, was similar to the system proposed by Keynes in The Economic Consequences of the Peace. ....John Maynard Keynes, 1st Baron Keynes (5 June 1883 - 21 April 1946), was a British economist whose ideas fundamentally changed the theory and practice of macroeconomics and the economic policies of governments. He built on and greatly refined earlier work on the causes of business cycles, and was one of the most influential economists of the 20th century. Widely considered the founder of modern macroeconomics, his ideas are the basis for the school of thought known as Keynesian economics, and its various offshoots.During the Great Depression of the 1930s, Keynes spearheaded a revolution in economic thinking, challenging the ideas of neoclassical economics that held that free markets would, in the short to medium term, automatically provide full employment, as long as workers were flexible in their wage demands. He instead argued that aggregate demand determined the overall level of economic activity and that inadequate aggregate demand could lead to prolonged periods of high unemployment. Keynes advocated the use of fiscal and monetary policies to mitigate the adverse effects of economic recessions and depressions. Keynes's magnum opus, The General Theory of Employment, Interest and Money, was published in 1936.The leading Western economies adopted Keynes's policy recommendations before the outbreak of World War II, and in the two decades following Keynes's death in 1946, almost all capitalist governments had done so. Keynes's influence waned in the 1970s, partly as a result of the stagflation that plagued the Anglo-American economies during that decade, and partly because of criticism of Keynesian policies by Milton Friedman and other monetarists. He and other economists had disputed the ability of government to regulate the business cycle favourably with fiscal policy.The advent of the global financial crisis of 2007-2008 caused a resurgence in Keynesian thought. Keynesian economics provided the theoretical underpinning for economic policies undertaken in response to the crisis by President Barack Obama of the United States, Prime Minister Gordon Brown of the United Kingdom, and other heads of governments.When Time magazine included Keynes among its Most Important People of the Century in 1999, it said that "his radical idea that governments should spend money they don't have may have saved capitalism." The Economist has described Keynes as "Britain's most famous 20th-century economist.