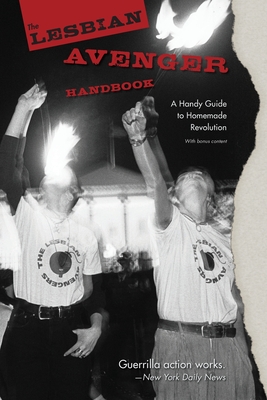 They were superheroes arriving "to make the world safe for baby dykes everywhere;" warriors with capes and shields doing a line dance; dykes "Lusting for Power," pushing a giant bed float down Sixth Avenue in New York (with lesbians on it); nationally-ambitious Avengers eating fire in front of a hostile White House; lovers reuniting a statue of Alice B. Toklas with Gertrude Stein, then waltzing in the snow in Bryant Park. And homos who shamelessly chanted, "Ten percent is not enough, recruit, recruit, recruit."

It only took a few years for the Lesbian Avengers to grow into a global movement with sixty autonomous chapters worldwide all working for the visibility and survival of lesbians, and all sharing an irreverent direct action aesthetic, eagerly dipping into agitprop and advertising and theater, in ways that still feel ground-breaking today.

Key to their success-the tools they developed to help lesbians understand and reproduce the Avenger action. One was the 1993 documentary video, Lesbian Avengers Eat Fire Too, which offered the why, the who, and the what, featuring interviews with Avengers, and sharing actions from their first year.

Another was this book, The Lesbian Avenger Handbook: A Handy Guide to Homemade Revolution, which offers step-by-step instructions for everything from how to hold a meeting to how to envision an action and wrangle the press-expertise gleaned from Avengers working in journalism, advertising, art, and theater, as well as long-time activists who honed their skills protesting the Viet Nam war, the abuse of farmworkers, forced sterilization of women of color, and bans on abortion, and who'd already, in some cases, led civil disobedience in ACT-UP.

This new edition of The Lesbian Avenger Handbook offers the bulk of this extraordinary resource unchanged, though it acknowledged advances in technology for activists still using it today. Important bonus material has also been included, including tips for demonstrating when civil rights are being trampled.

Also featured, An Incomplete History of LACROP (the Lesbian Avenger Civil Rights Organizing Project), and excerpts from their Out Against the Right: An Organizing Handbook, important historical documents offering hard-won insights about dyke organizing and the importance of building community for long-term social change.

With dozens of new pages of Avenger newsletters, Communiqu's from the Frontlines, and the inclusion of the Dyke Manifesto, the Handbook also serves as a Lesbian Avenger history told in their own words.

The 1993 edition of the Handbook was written by the novelist and essayist Sarah Schulman, and edited by Ana Simo, playwright and novelist, both among the co-founders of the group. The current edition is introduced and edited by journalist and founding member Kelly Cogswell.