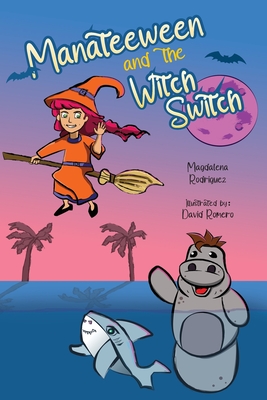 There is a magical portal behind a witch's house in Manateeville Key. This wonderful "almost-island" is in the South Florida waters. On Halloween night the portal can magically transform Witches. They can switch to become water creatures (specifically sharks), and manatees can switch to become kids. The manatee kids do it for candy, fun, and more candy. It is a yearly tradition. This year two new additions, Scrapper and Tata, are nominated to go. One of the manatees, Speedster, has a special shark friend, Scrapper, and another manatee has adopted an orphan, Tata, as her kid sister. But this Halloween, in the witch world, there is special purple moon ceremony. It only happens once in every hundred years. A new witch queen may be crowned during this special night. The queen's sister, Eclipse, wants to be become queen. She schemes a plan against her sister, Star. However, the queen also has a daughter, Skye. Eclipse makes the plan bigger to also stop her niece from becoming queen. The manatee kids want a fun night of Halloween trick or treating, costumes and especially candy. However, action unfolds for the manatee children and witch girls. Plans and events become intermingled. Will the night end with an upset or will everyone just dance it off?