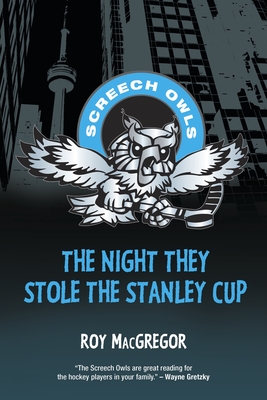 By Roy MacGregor
$10.52
Email or call for price

This is book number 2 in the Screech Owls series.

Someone is out to steal the Stanley Cup - and only the Screech Owls stand between the thieves and their prize!

Travis, Nish, and the rest of the Screech Owls have come to Toronto for the biggest hockey tournament of their lives - only to find themselves in the biggest mess of their lives. First Nish sprains his ankle falling down the stairs at the CN Tower. Later, key members of the team get caught shoplifting. And during a tour of the Hockey Hall of Fame, Travis overhears two men plotting to swipe the priceless Stanley Cup and hold it for ransom!

Can the Screech Owls do anything to save the most revered trophy in the land? And can the team also rise to the challenge on the ice and play their best hockey ever?

Roy MacGregor was named the media inductee to the Hockey Hall of Fame in 2012, when he was given the Elmer Ferguson Award for distinguished writing on the game. He has been involved in hockey all his life, from playing all-star hockey in Huntsville, Ontario, against the likes of Bobby Orr, from nearby Parry Sound, to coaching and is still playing old-timers hockey in Ottawa, where he lives with his wife Ellen. They have four grown children. Roy MacGregor is the author of several classics in the literature of hockey. Home Team: Fathers, Sons and Hockey was shortlisted for the Governor-General's Award for Literature. Home Game (written with Ken Dryden) was a bestseller as were Road Games: A Year in the Life of the NHL, The Seven A.M. Practice and his latest, Wayne Gretzky's Ghost: And Other Tales from a Lifetime in Hockey. The Screech Owls series is a huge international success, published in several countries including Sweden, Finland, Czech Republic and China. In 2005, Roy MacGregor was named an Officer in the Order of Canada.