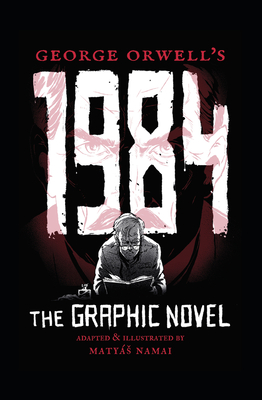 Winston Smith is a low-ranking member of the ruling Party in the nation of Oceania. Everywhere Winston goes, even his own home, the Party watches him through telescreens; everywhere he looks he sees the face of the Party’s seemingly omniscient leader, Big Brother. The Party controls everything in Oceania, even the people’s history and language. Now, the Party is forcing the use of an invented language called Newspeak which will prevent political insurgency by eliminating all words related to it. Even thinking rebellious thoughts is illegal. Such thoughtcrime is, in fact, the worst of all crimes. But a seed of dissent grows in Winston—one that will bring him into direct conflict with the Party, and with devastating consequences.

Rarely has one book ever been so rich in political and social criticism as 1984. Originally published in 1949, this new graphic novel edition of the dystopian classic, powerfully illustrated by Matyáš Namai, reveals Winston’s fight against the Party in all its horror and futility.

Matyáš Namai studied graphic design at the Škola Michael in Prague. He has contributed to the magazines ABC (The Master of Shaolin, The Millennium Thief) and Playboy (Ironic Applause). His comics and graphic novels aim to sensitively reveal the psychology of their characters, using a filmic sense of dramatic editing and a feel for detail. Matyáš’ favorite hobby is roasting bacon over a fire.

George Orwell was one of England's most famous writers and social commentators. Among his works are the classic political satire Animal Farm and the dystopian nightmare vision Nineteen Eighty-Four. Orwell was also a prolific essayist, and it is for these works that he was perhaps best known during his lifetime. They include "Why I Write" and "Politics and the English Language." His writing is at once insightful, poignant, and entertaining, and continues to be read widely all over the world.