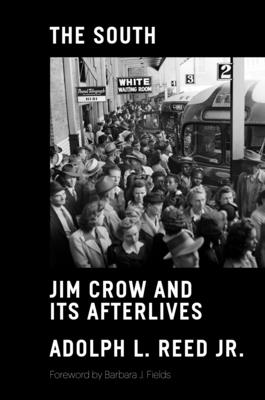 A narrative account of Jim Crow as people experienced it

The last generation of Americans with a living memory of Jim Crow will soon disappear. They leave behind a collective memory of segregation shaped increasingly by its horrors and heroic defeat but not a nuanced understanding of everyday life in Jim Crow America. In The South, Adolph L. Reed Jr. — New Orleanian, political scientist, and according to Cornel West, “the greatest democratic theorist of his generation” — takes up the urgent task of recounting the granular realities of life in the last decades of the Jim Crow South.

Reed illuminates the multifaceted structures of the segregationist order. Through his personal history and political acumen, we see America’s apartheid system from the ground up, not just its legal framework or systems of power, but the way these systems structured the day-to-day interactions, lives, and ambitions of ordinary working people.

The South unravels the personal and political dimensions of the Jim Crow order, revealing the sources and objectives of this unstable regime, its contradictions and precarity, and the social order that would replace it.

The South is more than a memoir or a history. Filled with analysis and fascinating firsthand accounts of the operation of the system that codified and enshrined racial inequality, this book is required reading for anyone seeking a deeper understanding of America's second peculiar institution the future created in its wake.

With a foreword from Barbara Fields, co-author of the acclaimed Racecraft.

Adolph Reed Jr. is a leading scholar of race, American politics, and inequality. Reed is professor emeritus of political science at the University of Pennsylvania, and has held positions at Yale, Northwestern, and the New School. He is a lifelong organizer and public intellectual, a contributing editor at The New Republic, and a frequent contributor to Harpers and The Nation.

"Adolph L. Reed Jr.’s work has long been characterized by its sharp, incisive analysis, counterintuitiveinsights, and wit. In the spirit of Jean Toomer’s Cane, Reed vividly captures the essence of a signal aspectof the African American tradition, a world known as “the Black Belt,” a world that is passing, a world inits final phase of transition, one that all-too-soon will vanish.  This riveting book is essential reading foranyone seeking to understand how the forces that shaped our complex racial past persist in shaping,and obscuring, our racial present."
– Henry Louis Gates, Jr., Harvard University

“Adolph Reed Jr. is the towering radical theorist of American democracy of his generation! This powerfuland needful book is a rare gem—a rich intervention in our present discourse in light of an unsettlingreflection on the recent past!”
– Cornel West, Union Theological and Princeton University

"Through decades as a political activist, journalist, scholar, and teacher, Adolph Reed has consistentlyadvocated a serious, historically grounded, and genuinely progressive politics. Attentive readers of thefollowing pages will learn how he arrived at his understanding of the past, his analysis of the present, hisdiagnosis of where politics has gone astray, and his prescription for where it needs to go from here.They may well, as a result, be inspired to think anew about the prospects for building a more humaneworld—and the steps, in thought and in action, that will be required to bring it about."
– Barbara J. Fields, Columbia University

“At a moment when professional and popular commentary about race and inequality is all too ready todraw neat and misleading analogies between the past and present, Reed’s recounting and examinationof everyday encounters during the waning decades of this important period of American life enables usto see what made the Jim Crow era distinctive.  In doing so, he helps us to see, and to understand, whathas and hasn’t changed about the role of race in American life.”
– Kenneth W. Warren, University of Chicago

“[A] trenchant history of the Jim Crow South … This spare, earnest recollection shines a unique light on the fight for racial equality in America.”
—Publishers Weekly

“A remembrance of the author’s early life below the Mason-Dixon line, while also making a case for class-based inequality as a historical constant.”
—Aaron Bogart, White Review (“Best Books 2022”)