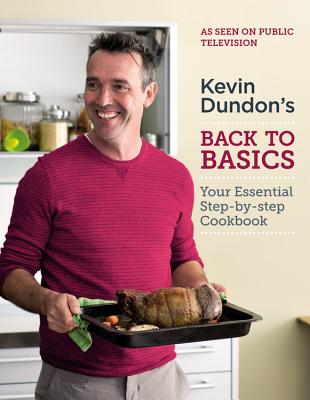 By Kevin Dundon
Email or call for price
Out of Print

Kevin Dundon's Back to Basics is the essential kitchen bible.

By explaining and demonstrating core cooking techniques, Kevin opens up a vast repertoire of dishes to every cook. From poaching eggs and making perfect pastry to pan-frying steak and creating the ultimate chocolate mousse, Kevin shows that once you understand the basic technique you can master any dish.

In ultra-clear step-by-step sequences, that are just like having Kevin beside you in the kitchen, he takes you through his tried-and-tested methods and provides lots of hints, tips and insider secrets along the way. Technique by technique the book builds into a comprehensive kitchen bible, with over 100 delicious recipes for everything from Eggs Benedict and Navarin of Lamb to Chicken Noodle Soup, Raspberry Souffle and Chocolate Fondant.

One of Ireland's best-loved chefs, Kevin Dundon can usually be found busy at work in the Dunbrody House kitchens and cookery school. A chef with a love of locally sourced produce, he has cooked for many well-known celebrities during his career, including Queen Elizabeth II, President Bush and Bono.

In 1994, Kevin was head-hunted to become Executive Head Chef of the Shelbourne Hotel in Dublin, widely recognised as one of the most prestigious chef appointments in Ireland. In 1997, Kevin and his wife founded the Dunbrody Country House Hotel, which has become synonymous with contemporary Irish country house cooking. The award-winning hotel also hosts Kevin's cookery school.

In 2008 Kevin put his name to MGM Grand's new restaurant venture Raglan Road in downtown Disney, Orlando, establishing a fanbase in the USA. The following year saw Great Family Food hit the bookshops, followed by Recipes That Work in 2010.

Over the past few years Kevin has appeared on numerous TV channels including ESPN Cable, CBC (Live) Canada, RTÉ (Live) Ireland and No Frontiers Travel Show. Kevin's profile soared in 2011 with his role as Resident Chef of RTÉ's hugely popular The Afternoon Show every week, and he is also a regular on Irish radio.

Irish chef Kevin is known for
his fresh and rustic approach to eating and this beautiful book will fill you
with enthusiasm for his way of working.—Great British Food