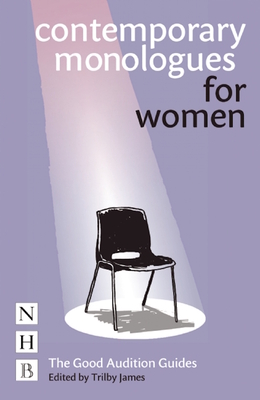 THE GOOD AUDITION GUIDES: Helping you select and perform the audition piece that is best suited to your performing skills In this volume of the Good Audition Guides, you'll find fifty fantastic speeches for men, all written since the year 2000, by some of our most exciting dramatic voices. Playwrights featured in Contemporary Monologues for Women include Mike Bartlett, Alexi Kaye Campbell, Caryl Churchill, Helen Edmundson, debbie tucker green, Ella Hickson, Lucy Kirkwood, Rona Munro, Joanna Murray-Smith and Enda Walsh, and the plays themselves were premiered at the very best theatres across the UK including the National Theatre, the Royal Shakespeare Company, the Bush, Soho and Hampstead Theatres, Manchester Royal Exchange, the Traverse in Edinburgh, the Abbey in Dublin, and many on the stages of the Royal Court. Drawing on her experience as an actor, director and teacher at several leading drama schools, Trilby James prefaces each speech with a thorough introduction including the vital information you need to place the piece in context (the who, what, when, where and why) and suggestions about how to perform the scene to its maximum effect (including the character's objectives and keywords). Contemporary Monologues for Women also features an introduction on the whole process of selecting and preparing your speech, and approaching the audition itself. The result is the most comprehensive and useful contemporary monologue book now available. Sound practical advice for anyone attending an audition... a source of inspiration for teachers and students alike. - Teaching Drama Magazine on The Good Audition Guides A good addition to any student's/teacher's bookshelf. - Drama Magazine (published by National Drama) Trilby James rides to the rescue... a very useful something for everyone. - ReviewsGate.com Trilby James trained as an actress at RADA, before working extensively in theatre, film and television, before starting as a freelance director and teacher at several leading drama schools including ALRA, Arts Educational Schools, Royal Central School of Speech and Drama, East 15, Mountview Academy of Theatre Arts and the Royal Academy of Dramatic Art where she is now an Associate Teacher. She is a script reader and dramaturg for Kali Theatre Company and has directed several play-readings for their 'Talkback' seasons.

TRILBY JAMES studied at RADA and over the years has worked extensively as an actor in theatre, film and television. In 2000 she also began working as a freelance director and teacher at several leading drama schools including Alra, Arts Educational Schools, Central School of Speech and Drama, East 15, Mountview Academy of Theatre Arts and The Royal Academy of Dramatic Art where she is now an Associate Teacher.