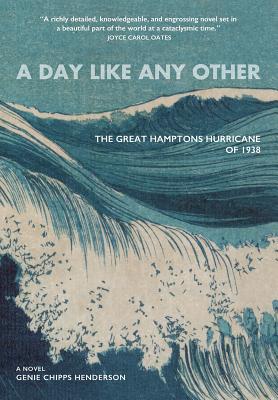 By Genie Chipps Henderson
Email or call for price
Special Order. May not be available. Call the store for details.

Prophetic fiction that is a warning of storms to come.

September 21, 1938 was a day that began much like any other day at the ragtag end of the summer season on the eastern end of Long Island – better known as The Hamptons. The storm came out of nowhere with no warning, destroying houses, farms, shops, laying flat giant elms and, by the time it was over, had killed nearly 800 people on Long Island and in New England.

But A DAY LIKE ANY OTHER is not just a disaster novel. The storm is a framing device for an historical tableau vivant of the East End. The Hamptons of that time was home to fishermen, farmers, shopkeepers, kids, and garden club women – an Our Town of the late Depression era. But in the summer, like today, its population swelled with social icons, arrivistes, and excessive urban wealth.

Henderson brings to life that Hamptons and that era through the stories and voices of locals, artists and the summer colony. She tells us what a perfect storm can do to a beautiful landscape and its people.

Genie Chipps Henderson is a writer and documentary videographer specializing in stories and histories of the East End of Long Island – her home. Her previous novel, A Woman of the World, was named one of the top debut novels of the year by Publishers Weekly.

“This terrifying take on what happened in the Hamptons at summer’s end, 1938, reminds us that climate is bigger by far than we are, and we should not engage in changing it.”
— Dava Sobel, author of Longitude and Galileo’s Daughter

“A richly detailed, knowledgeable, and engrossing novel set in a beautiful part of the world at a cataclysmic time.”
— Joyce Carol Oates

“Genie Chipps
Henderson has conjured fact-based fiction that reads credibly and poignantly as
it explores the complexities of our flawed humanity and the sometimes fierce
vagaries of weather.”
— Wally Lamb, author of She’s Come Undone and I Know This Much Is True