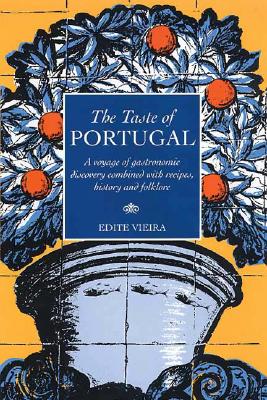 By Edite Vieira
Email or call for price
Out of Print

Very unfairly, the cuisine of Portugal remains largely unknown outside Portuguese-speaking communities. Perhaps it is presumed to be too much a poor relation of Spanish food to be worth exploring. If so, it is a pity, for, as Edite Vieira demonstrates in her classic The Taste of Portugal--now reissued by Grub Street--it retains a distinctive, vibrant identity.

Among the very interesting characteristics of Portuguese food are the presence, uniquely in Europe, of fresh herb coriander as a flavoring, a most imaginative use of clams and what almost amounts to a mania for salt cod. The Taste of Portugal gives a wonderfully rounded picture of this robust and fascinating cuisine, with its bread-heavy soups, its salt cod and fish dishes, its high-flavored stews (in one well-known dish, combining pork and clams), its game and its extravagantly sweet desserts, rich with eggs.

The first recipe is for what has become virtually a national dish: Caldo Verde, a simple but delicious potato soup enlivened with finely sliced greens. It was this soup which apparently prompted a British journalist to remark on the poverty of the Portuguese that forced them to make soup from grass.

Edite Vieira provides a lively commentary that puts the food into its cultural and historical context--a number of the dishes are of great antiquity--and is an absolute delight to read. --Robin Davidson.