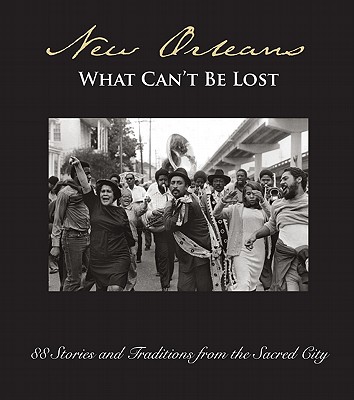 By Lee Barclay, (Editor)
Email or call for price
Out of Print

The eighty-eight stories and traditions in New Orleans: What Can't Be Lost are the piano keys in a love song to the city. Alongside Christopher Porché West's alluring black-and-white photographs, New Orleans' culture bearers pay tribute to the city they call home. From Storyville to the Super Bowl, from cover to cover are found Pulitzer Prize-winning writers--four of them gathered on these pages; Creole chefs; float and costume designers; a break-acrobat flipping forward over tourists lying on the pavement like matchsticks across from Jackson Square; Black Mardi Gras Indians; parade captains; musicians; protectors of the city's historic landmarks; writers of its poems and articles and novels and plays; and those who pass down traditions in the performance of New Orleans culture.

By Jan Ramsey - offbeat, September 1, 2010
It’s not that often that I fall in love with a book, but after reading through New Orleans, What Can’t Be Lost: 88 Stories and Traditions from the Sacred City, I’m raving about it.

I purchased my copy at the event where Sweet Home New Orleans published its report on the state of the music community last week. Christopher Porché West, whose photographs you’ve probably seen in New Orleans (I have one of his in my office), contributed all the photos in the book. Porché West has been a documentarian of the “Sacred City” for over 30 years now, and his photographs, coupled with short jewel-like written vignettes about what makes New Orleans such a special place, create a book to be treasured for anyone who loves New Orleans.

There are entries from everyone from Poppy Z. Brite (“The defining characteristic of New Orleans is surely a live-and-let-live credo, a near-universal belief that as long as that fat man wearing his pirate costume and pushing the hot dog cart [referring to Ignatius Reilly] isn’t hurting anybody, he’s not crazy, he’s just interesting.”) to Anders Osborne (“The music of New Orleans is as rich as the smoke of fifteen kitchens cooking at the same time on one block; it is as deep as ten thousand years of culture merging on one square; it is as joyous as the birth of a child and can be as mournful as life without any hope or faith.”) to Simonette Berry (“Performance is a part of daily life here. The famous costuming tradition is translated into a different ceremony through the decoration of homes and businesses.”) to Michael Sartisky (“New Orleans was, is and will be—even more so if we perish—the shrine and seedbed of American culture.”).

These are certainly not the most incisive, pithy or profound statements from this book, but it’s so chock-a-block with ideas and realities about what makes New Orleans so special, that’s it’s difficult to quote what’s best.

The photos by Porché West aren’t necessarily tied to the essays within, but they certainly demonstrate what the city is about; its beauty, pathos, fun, decay, music and all the rest.

One of the best things about the books is that its proceeds will benefit Sweet Home New Orleans, an organization that’s done so much to help local musicians and culture standard-bearers recover after Hurricane Katrina.

If you love New Orleans and find that why you love it so is difficult for you to express in words (as I often am), then get this book, read it, and buy one for your friends…


By Suzanne Stouse, New Orleans Times-Picayune, August 29, 2010
Just when you’re pretty sure your heart can’t bear another word or picture on the subject comes a remarkable Katrina anniversary book called “New Orleans: What Can’t Be Lost” – 88, count ’em, 88 – short pieces by local writers famous and not-so on the treasures no storm could take away.

“Piano keys in a love song to New Orleans” is what editor Lee Barclay, a writer and former crisis-intervention program administrator, calls the book, which also features a gallery of funny, sad, uniformly compelling photographs by Christopher Porché West.

Proceeds will spread the love further – with all profits from the book going to Sweet Home New Orleans, a 501(c)(3) organization supporting musicians and other people and groups pledged to perpetuating the city’s cultural traditions.

The book, subtitled “88 Stories and Traditions from the Sacred City,” was written by “people who endlessly inspire me,” Barclay says in the eloquent preface. People like Richard Ford, whose foreword, titled “The Indispensable Thing,” is just a flip or two past a page totally blank save for the words “We remember.”

The Pulitzer Prize-winning author puts the lessons learned simply: “You can rebuild a city, but you can’t remake it. . . There are some things you mustn’t lose or life’s not life for any of us. ”
The book’s section titles hint at a few of those indispensable things: “March Grandioso,” “Big Chief Got a Golden Crown,” “Didn’t He Ramble.” The essay titles draw you closer: “You’re Gonna Need Some Hot Sauce with That” -- restaurateur Wayne Baquet’s lament about the food in Baton Rouge, his home-in-exile; and “Everyone Has a Valve,” in which the capital city takes another hit -- this one shot from the curling lip of Ignatius J. Reilly -- in Poppy Z. Brite’s hoot of a riff on the anti-hero of “A Confederacy of Dunces.”

The piece quotes the big guy on his bus trip to Baton Rouge, when he decides once and for all that “Outside the city limits, the true heart of darkness begins.”

Through the piece, Brite plays up our legendary “apartness” from people in other places: “In other words, every true New Orleanian has a valve,” she writes of us and of Ignatius’ famously malfunctioning part. “We are each and every one of us Ignatius, we diehards who have committed ourselves to this city not because we are especially brave or strong or determined to rebuild – though we may be all of these things -- but simply because we have no choice in the matter.”

“What to Do with Your Goat in a Drowning World” is the title of an Andrei Codrescu poem lambasting Katrina rescuers who would “Take the people damn their friends”; “Olive Oil and Alligator Pears” James Nolan’s memory of an after-Sunday-dinner beauty ritual practiced at his Memere’s house, where everyone present had olive oil massaged into his scalp. Other times, to prevent sunburn, the stuff was splashed on after a first course of vinegar -- “until we smelled like little salads.”

Ian McNulty explains what’s behind “one of the clichés trotted out about New Orleans . . . that people here ‘love to have a good time,’ as if there were communities where people just love to get together to sulk . . . (Our) fun springs less from pop culture and more from resilient family traditions and the interaction of people from different generations and social realms.”

“Have You Met Miss New Orleans?” is Kelly Wilson’s description of that title-holder whose “voice has the depth of William Faulkner, the bite of Lillian Hellman, the raw whisper of Robert Olen Butler” – who’s also included here, with a short, powerful piece called “Upon a Photograph by E.J. Bellocq.”
“Salted Earth” is John Biguenet’s memorable meditation on breaking the barren ground where his family’s garden once bloomed, the soil cracking underfoot because of the salt water that covered it.
In the moving “Unexpected,” Louis Maistros asks a wizened woman – and learns -- if voodoo really works; his “Anti-requiem” is a love song for our cemeteries, where “here lives music and art and wild mystery, a place where children may remain children and puritanical rituals of gloom are run off on a rail.”

In “The End of the World,” Joshua Clark, who also wrote the afterword, mourns for Plaquemines Parish, where “when the flooding receded, it left hardly a shadow because there was nothing left to make one.”

The true “March Grandioso” of the St. Augustine Marching 100 – its integration of Carnival parades in 1967, when it joined the Rex parade -- is saluted by Dr. Michael White. Through racial taunts and physical attacks along the route, “band members maintained rank,” he writes. “They responded with thunderous music and defiantly marched on with the attitude of a conquering army heralding change.”
And so it goes on, like beads on a rosary, one after the other story a funny or dead-serious petition for resurrection. In “Offerings,” Simonette Berry unearths signs of the times after the storm – “little mysteries of our salvation” including the truly peerless posting on Claiborne Avenue that promised “Free Marriages Performed for the Purchase of 1000 pieces of Chicken.”

Another sign: the fallen oak tree on St. Charles Avenue that somebody had painted and wrapped with swirls of shiny paper. The decorator had done it “to give the few people who drove by a sense of hope,” Berry writes. He had done it because “that tree was his redemption, his rise above the waterline.”

“As the New Orleans Saints, our gods of the gridiron, had shown us in 2006 – Good Lord, you gotta believe! Church’s – and its wings of desire, or at least the wings I desired – could rise again. It’s impossible to be agnostic about fried chicken.”

Other good stuff (though truthfully, just about every piece is strong): Leah Chase on the power of New Orleans food that has had her New York devotees directing her to “ ‘Put me an oyster loaf on the plane, and I’m going to meet the plane’ ” . . . Chris Champagne on the dual purpose of “yeah you right” (“It could mean ‘I agree’ or ‘I disagree but don’t want to argue about it, so I’ll just faux-agree.’ Yeahyourite.”) . . . Lolis Eric Elie, of “Tremé” writing fame, on the Tremé where he lives . . . Tom Piazza on the wonder that was Professor Longhair . . . Kalamu ya Salaam, going “Beneath the Bridge (A Eulogy for North Claiborne Avenue from Canal Street Down to Elysian Fields),” where “didn’t we ramble, til the waters cut us down”. . . Michael Sartisky on the view from here, improved by “a certain slant of light which sees nuance and possibility better than normality.”

On second-lining, Jorin “Jahn Be” Ostroska is a revelation, taking us on “this lifeboat of humanity exhilarating on white-water rapids of funk . . . rolling past broken lives in heaps, tears dried up on the shock of rubble piled high above the St. Bernard and Calliope . . . the survivors, the fools, the hangers-on; we drink a Heineken and smile big at one another ’cause we’re all in the same lifeboat and it’s sustaining us, keeping us afloat for one more day . . .”

It’s the same for Ned Sublette and his rhythmic “Ooh Poo Pah Doo” – his name for “the cultural continuity of New Orleans” – in which he writes of social and pleasure clubs, tambourines and fans, but also “The struggle for the civil right to dance down the street, free from the fear of thug or cop./ The struggle to remember what you saw, heard and lived, when even your shoebox of pictures is gone.”
Maybe Marda Burton’s piece on the Saints’ decision to stay – and so winningly personify our resilience -- sums up best What Can’t Be Lost: “Referring to the nightmare called Katrina, a visitor asked: ‘Has the city come back yet?’ My answer: ‘It never left.’ ”

Or maybe it’s Julie Kane’s story about the spring after Katrina and “The Purple Martins on the Causeway Bridge.”

“Would they return? The answer was yes, and in numbers almost as great as before, though not even the purple martin experts seem to understand how the birds survived or why they returned. But then, there is nothing very rational about the attachment to one place on earth. Feather or flesh, we are connected to each other, and our spirits dance on the air as they near home.”