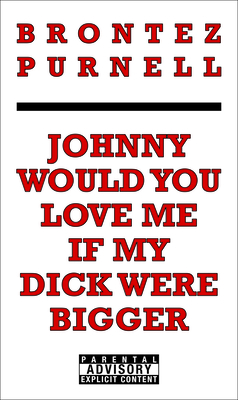 "Brontez is a raw tongue of flame blazing through all the blatant fakery and insincere bullshit of today's gay/music/human scene. This audacious non-memoir burnt the hair off the back of my neck and had me rolling with glee." --S.F. Bay Guardian A dirty cult-classic put out in a small batch by an underground publisher (Rudos and Rubes) in 2015, Johnny Would You Love Me If My Dick Were Bigger recounts the life of an artist and "old school homosexual" who bears a big resemblance to author Brontez Purnell. Our hero doesn't trust the new breed of fags taking over San Francisco, though. They wear bicycle helmets, seat belts, and condoms. Meanwhile, he sabotages his relationships, hallucinating affection while cruising in late night parks, bath-houses, and other nooks and crannies of a newly-conservative, ruined city. Furiously original, vital, and messy, this funny "non-memoir" uncovers a revelatory truth for the age: there are things far scarier than HIV.

Brontez Purnell has been publishing, performing, and curating in the Bay Area for over ten years. He is author of the cult zine Fag School, frontman for his band The Younger Lovers, and founder and choreographer of the Brontez Purnell Dance Company. Formerly a dancer with Gravy Train!!!, a queer electro indie band that gained national prominence in the mid-2000s, Purnell's other prominent artistic collaborations include his supporting role in the queer independent feature film, I Want Your Love (Dir. Travis Mathews, 2012). He was a guest curator for the Berkeley Art Museum's L@TE program in 2012, awarded an invitation to the 2012 Radar Lab queer arts summer residency, honored by Out Magazine's 2012 Hot 100 List and 2013 Most Eligible Bachelors List, and most recently won the 2014 SF Bay Guardian's Goldie for Performance/Music.