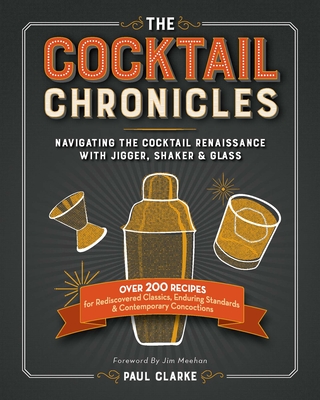 Not every revolution requires an insurrection, and not every renaissance begins in salons, galleries or cloistered chambers. The cocktail seemed an unlikely candidate to start either a revolution or a renaissance, but somehow over the past decade, it has managed to become the center of both. Today the cocktail is celebrated at week-long conferences and festivals that draw thousands. Taking cues from a wider culinary movement that's been building steam for decades, craft-cocktail bars (and the bartenders and writers who inhabit them) are digging in the depths of the drink's rich history and apply these fresh-taught lessons to new drinks, appropriating techniques and skills acquired everywhere from centuries-old handbooks. However, as fascinating as today's artisan-driven or tech-savvy craft-cocktail bars can be, there's also a need for cocktail comfort food--for exciting drinks that have the benefit of being delicious, and that can be easily prepared by non-professionals. From Paul Clarke, the 2014 Best Cocktail & Spirits Writer and founder of the groundbreaking spirits blog, The Cocktail Chronicles, comes an approachable guide to the cocktail renaissance thus far and--as the name implies--a chronicle of the cocktails that have come along the way. The Cocktail Chronicles is not a lab manual for taking the cocktail experience to a molecular level; nor is it an historical monograph tracing the details of our forebears as they developed and mixed the drinks we enjoy today. Instead, The Cocktail Chronicles is a collection of approachable, and easily replicable drinks that all share the same thing: a common deliciousness and a role -- both big and small -- in the ongoing and thriving cocktail renaissance. This collection of expertly curated recipes represent a photo album of sorts--snapshots of people encountered over the years, with some close friends and family members depicted alongside a few dimly remembered strangers. The Cocktail Chronicles believes cocktails should be fun: it doesn't demand the purchase of a new product for every recipe or require hours spent preparing a single ingredient -- that is a sure way to suck the joy right out of it. Life is complicated--a good drink doesn't have to be. To that end, The Cocktail Chronicles has you covered.

Paul Clarke is a journalist specializing in spirits, cocktails and the culture of drink. The executive editor of Imbibe magazine, he has spent the past decade researching and writing about drinks for Imbibe, the San Francisco Chronicle, the New York Times, Serious Eats, Tasting Table and many other publications and websites, and is a member of the editorial board for the Oxford Companion to Spirits and Cocktails. Since 2005, Clarke has documented his exploration of fine spirits and mixology on The Cocktail Chronicles, one of the first exclusively spirits and cocktail-related blogs on the Internet, and he's the founder and moderator emeritus of Mixology Monday, a monthly online cocktail party that's attracted scores of participants and thousands of readers since its 2006 debut. A regular speaker at events including Tales of the Cocktail, Portland Cocktail Week and the Manhattan Cocktail Classic, Clarke has received a Spirited Award from Tales of the Cocktail for Best Cocktail Writing, and a Bert Greene Award from the International Association of Culinary Professionals for his drinks journalism. He lives in Seattle.