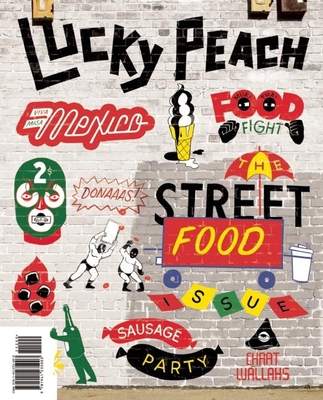 This is book number 10 in the Lucky Peach series.

Lucky Peach is a quarterly journal of food and writing. Each issue focuses on a single theme, and explores that theme through essays, art, photography, and recipes. Less summary than survey, the street food issue takes to the world's streets like a starved flaneur, flitting from birria in Mexico City to chicharron-studded tortillas in Buenos Aires, from chaat in Mumbai to gizzard noodle soup in Chiang Mai's Lumpinee Boxing Stadium. This issue watches as children made stick bread in Copenhagen and shares a report on who's eating all your cigarette butts (spoiler: microbes). For Jonathan Gold, the experience of eating street food is inseparable from time and place. Issue 10 also delves into the history of "Turkey in the Straw," an ice-cream truck ditty that rings out across Los Angeles; spends a day with the Doughnut Luchador of East LA (doughnut slinger by day, luchador by night); and learns what happens, exactly, when you cook with charcoal, and what nixtamalizing does to corn. Plus, a look into the wondrous array of street sausages around the globe, the best of the wurst.

"A glorious, improbable artifact Lucky Peach is not only something to behold, it is also something to hold, a reminder of print’s true wingspan.”
The New York Times

"A masterpiece of modern-food culture."
Time

The magazine’s tone is so casual it’s almost drunken. Its aesthetic is a graphic pulp pastiche of drawings, photo essays and kitschyou’ll discover traces of comic books, handwritten script and recipes presented in science-lab format.”
The Wall Street Journal

There’s been a sudden growth in magazines for food obsessives eager for more than just recipes. Lucky Peach is perhaps the cleverest. A nerdy, witty high-end- fan-zine, it makes smart use of Chang’s contacts, with Anthony Bourdain, Harold McGee and Mario Batali among the contributors.”
The Guardian