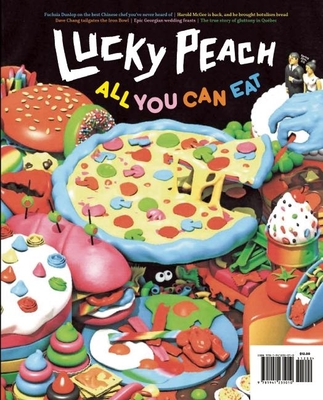 This is book number 11 in the Lucky Peach series.

Lucky Peach is a quarterly journal of food and writing. Each issue focuses on a single theme, and explores that theme through essays, art, photography, and recipes. Issue 11 is our ALL YOU CAN EAT issue. We eat and eat and eat some more: at a country club in Boca Raton, at a series of wedding feasts in the Republic of Georgia, in the parking lot outside of the Iron Bowl. We attempt to beat the buffet, see how people stuff themselves at sex parties, hang out with Yu Bo, the best Chinese chef you've never heard of ("All Yu Can Eat"), and learn about ruminant digestion ("All Ewe Can Eat"). Gabrielle Hamilton demonstrates the many ways to enjoy the celery languishing in our crispers; novelist Padgett Powell shoots (then stews) the ubiquitous squirrel. Plus, we take stock of what hunger looks like around the world and of what's for dinner at a prison in Westville, Indiana. Too much? That's the point.