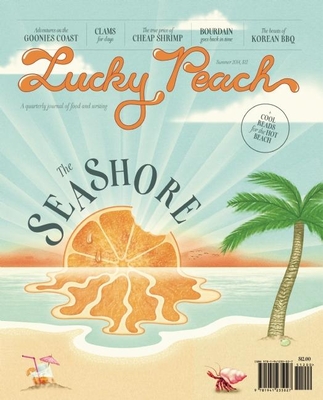 Lucky Peach is a quarterly journal of food and writing. Each issue focuses on a single theme, and explores that theme through essays, art, photography, and recipes. Lucky Peach #12 is all about food from littoral realms -- the spaces where land meets sea. We dive for abalone and gather seaweed off the California coast; we harvest honey in the Bangladeshi Sundarabans; we go behind the scenes at a shrimp farm in Indonesia, and spend a Sunday at the cockle sheds in Leigh-on-Sea. We learn lots about edible sea beasts, from clams to hagfish to sea squirts. Anthony Bourdain takes us on a stroll down a beach town's memory lane; Robert Sietsema samples practically all the clams on Long Island; Stuart Dybek catches himself a perfect breakfast in the Florida keys. We share recipes from Vietnam and Portugal and the Oregon coast--we aren't shellfish. Also in this issue: a special, detachable sixteen-page Beach Reads comic book to take on your seaside jaunts, featuring comics by Jason Jagel, Tony Millionaire, and more, because it's summertime, and the reading is easy.