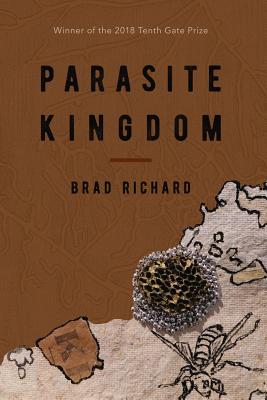 Poetry. Winner of the Tenth Gate Prize, 2018. In these poems Brad Richard creates a mythos that at first appears to be a warning about where our world is headed, yet reveals itself as a dirge for a way of being that we've not yet realized is gone. Richard's poems construct underground caverns where poetry moves dangerously. This collection is the accretion of decades of reading, thinking, and writing, borne out of long gestation.

"A cart rattles into the palace courtyard and explodes. A doomed king blesses the children, then commands the citizens of his ruined nation to root out invaders. Sentries fix their sights on a little girl. And, burrowed among tunnels beneath the capitol, and enormous wasp wasp flicks her antennae, pivots, and tests the air. In Parasite Kingdom, Brad Richard conjures up a wrecked world that is the twin of our own, but sifted through nightmare and apocalypse. Richly imagined and terrifying, this is a first-rate collection of poems."

--Kevin Prufer, author of How He Loved Them and Churches

"When insanity reigns in high places, and the culture has commodified human depths into glittering surfaces, when the Dow Jones serves as oracle, and reality reads from a script, perhaps we need most what Brad Richard works toward in Parasite Kingdom a radical and instantaneous mytho-poesis that might give us perspective by breaking the whole damn thing apart. Taking both inspiration and refuge in Herman Melville--that fundamental chronicler of American unconscious--Richard gives us new apocrypha to ward off current apocalypse, offers us new symbols by which we might come to understand ourselves. Here the White Whale is replaced by the Parasitic Wasp, and the questions of unfathomable depths are replaced by questions of what has planted her eggs in our heads, and what life from them might emerge. Some of those lives, no doubt, are these very poems--as intricate and precise in their formal lives as the elegant casques of their totem wasps, as urgent as a sting, and furthering of genuine care--as a bee tends a field by burying itself in blossom--in the most unexpected of ways. As antidote is often made from the poison it counters, Parasite Kingdom gives us our needed dose, bitter to taste, but in the end, the truer vermifuge."