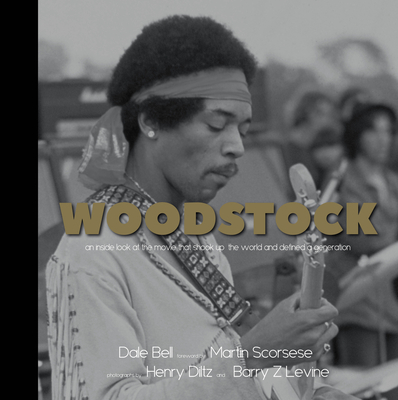 In celebration of the 50th Anniversary of Woodstock, this brand-new photo book goes behind the scenes of the hit documentary film Woodstock Where were you in the summer of '69? During these tumultuous times, the war was raging; Ali had been stripped of his crown; and in an obscure patch of earth in upstate New York, an event called Woodstock would change the world. This unique book is a collection of remembrances and perceptions from the filmmakers who created, and for performers and festival producers who appeared in, the Academy Award winning film, Woodstock. Featuring Janis Joplin, David Crosby, The Who, Joan Baez, Merv Griffin, and many, many, more

Dale Bell, 78, has spent his professional life in the arts, television and film. His awards include the Academy Award (Woodstock), the Peabody Award (Kennedy Center Tonight), two Emmys, four BAFTAs, and two Christophers. His work--performance, dramatic, documentary, commercials and industrials--has been seen globally, primarily on public television and NBC, ABC, A&E, Discovery, History, The Learning Channel, TBS, and others. In 1999, he joined Harry Wiland to create the Media & Policy Center, where together, they have earned the Ashoka and the Purpose Prize Fellowships while producing social justice multi-media initiatives for PBS on such topics as health care, eldercare, sustainable pioneers, healthy schools and communities, and now, Opioids, the VW scandal, and Our Kids with Professor Robert Putnam. They have also been professors of a two-year graduate course at Woodbury University in Burbank that focuses on leveraging media for greater social justice. Henry Diltz is an extraordinary rock n roll photographer unlike any other. A founding member of the Modern Folk Quartet, Diltz is as much at home as a musician on tour, as he is a visual historian of the last four decades of popular music. The rapport he's developed with his musician friends, along with his down-to-earth-grin and frequent laugh, enables him to capture the candid shots that convey a rare feeling of trust and intimacy with his subjects. For Diltz, the pictures began with a $20 second-hand Japanese camera purchased on tour with the Modern Folk Quartet. When MFQ disbanded, he embarked on his photographic career with an album cover for The Lovin' Spoonful. Despite his lack of formal training, Diltz easily submerged himself in the world of music: the road, the gigs, the humor, the social consciousness, the psychedelia, the up and down times. For over 40 years, his work has graced hundreds of album covers and has been featured in books, magazines and newspapers. His unique artistic style has produced powerful photographic essays of Woodstock, The Monterey Pop Festival, The Doors, Crosby, Stills, Nash & Young, Jimi Hendrix and scores of other legendary artists. Diltz continues his distinguished career, generating new and vibrant photographs that inspire the rock n' roll fan in each of us.