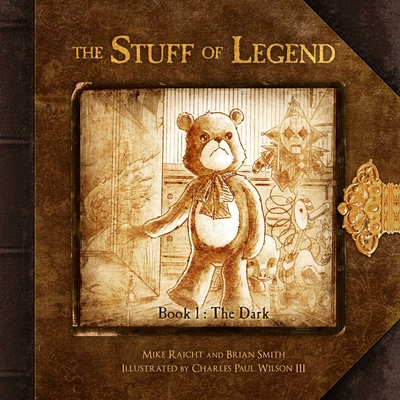 This is book number 1 in the The Stuff of Legend series.

The year is 1944. As Allied forces fight the enemy on Europe’s war-torn beaches, another battle begins in a child’s bedroom in Brooklyn.

When the nightmarish Boogeyman snatches a boy and takes him to the realm of the Dark, the child’s playthings, led by the toy soldier known as the Colonel, band together to stage a daring rescue. On their perilous mission they will confront the boy’s bitter and forgotten toys, as well as betrayal in their own ranks. Can they save the boy from the forces of evil, or will they all perish in the process? The Stuff of Legend is a haunting and ultimately redemptive tale of loyalty, camaraderie, and perseverance.weary and vastly outnumbered by the armies of the cunning Boogeyman, Maxwell the teddy bear and Percy the piggy bank lead their troops into the savage wilds of the Jungle in search of sanctuary. Loyalties will be tested and horrible secrets exposed.

Mike Raicht spent four years as an editor at Marvel Comics. Since leaving Marvel his writing credits range from superhero comics, such as Spider-Man, X-Men, Batman, Superman, and Hulk, to more horror-oriented fare like Army of Darkness, Deadworld, and Marvel's MAX Zombie.

Brian Smith is the creator of PEA, BEE, & JAY available 9/1 from #HarperAlley! Co-creator of NYTimes Bestseller The Stuff of Legend. Writer/Artist ofTree Mail!

Charles Wilson III is the illustrator and co-creator of The New York Times Best-Selling Graphic Novel The Stuff of Legend (published by Th3rd World Studios).