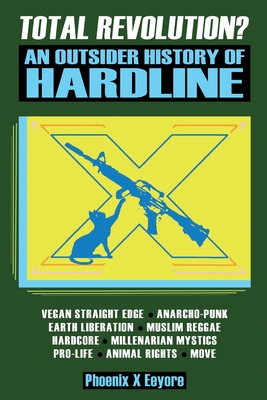 A history of the Hardline movement - the vegan straight edge offshoot born from the late-1980s Hardcore music scene.

Starting in the early 1990s, the Hardline scene drew from British predecessors to pioneer Earth and animal liberation in the US hardcore scene. With bands such as Vegan Reich and Raid that inspired Earth Crisis and helped spark the vegan straight edge scene, Hardline has remained under-analyzed and under-discussed. They pre-dated Extinction Rebellion by far but few listened. Hardliners and people inspired by Hardline engaged in numerous animal and Earth liberation direct actions in the 1990s. They founded CAFT (Campaign to Abolish the Fur Trade). They also caused enormous controversy within punk, hardcore, and straight edge scenes.

This book draws from a wide range of sources to present and discuss a history of Hardline. People have accused Hardliners of fascism, sexism, racism, and misogyny without pointing toward evidence. In turn, Hardliners have, after the fact, downplayed the extent to which the movement agitated against abortion, threatened abortion doctors, and made anti-homosexuality a key pillar of their scene. Some have labeled Hardline a "sect," a "religion," or a "cult" -and, considering that the two follow-up groups to Hardline, Ahl-i Allah (People of God) and Taliyah al-Mahdi (Vanguard of the Messiah) openly identified as Shi'a while drawing from Rasta, Jewish, Taoist, and other traditions, one can understand perhaps why.

Yet, until now, no one has really tried to collect the relevant sources, documents, and texts that begin a coherent and comprehensive conversation about Hardline. To what degree did they actually support a vegan dictatorship? How did they relate to The MOVE Organization (supposedly a major inspiration for the scene and a group with whom they shared a nearly identical philosophy)? How many people organized under the Hardline mantle? What did they accomplish? Why did they die out (....or did they die out)? And, perhaps most importantly, what can people working for Earth and animal liberation learn from Hardline's successes and failures?

This book explores those questions and more, ultimately asking, where do you stand... and what will you do?