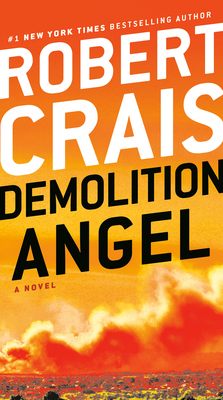 “Crais is at the top of his game, and Demolition Angel delivers the goods. With a bang. . . . It’s Silence of the Lambs meets Speed. . . . Crais knows how to press all the right buttons in keeping the story line taut and the action, well, explosive.”—San Francisco Chronicle

Carol Starkey is struggling to pick up the pieces of her former life as L.A.’s finest bomb squad technician. Fueled with liberal doses of alcohol and Tagamet, she’s doing time as a Detective-2 with LAPD’s Criminal Conspiracy Section. Three years have passed since the event that still haunts her: a detonation that killed her partner and lover, scarred her body and soul, and ended her career as a bomb tech.

When a seemingly innocuous bomb call explodes into a charred murder scene, Carol catches the case and embarks on an investigation of a series of explosions that reveal chilling intentions. The bombs are designed expressly to kill bomb technicians. Now, as the one tech who survived the deadliest of blasts, Carol is in for the most perilous fight of her life. . . .

“Gripping . . . Crais piles on plot twists . . . gathering the separate threads at the end and igniting them like a string of fireworks.”—People

“A powerful, self-contained novel of suspense that has the compactness, velocity, and effectiveness of a well-aimed bullet . . . This is a thriller that works on every level, a pivotal work from a crime novelist operating at the top of his game.”—Los Angeles Times

“Fascinating and frighteningly believable . . . Starkey is one of the toughest characters to grace the crowded field of thriller books in a long time.”—USA Today

“A flammable techno-thriller with the kind of force that knocks out windows.”—The New York Times Book Review

"Packs an explosive punch. Though the pace of the book moves like a quick-burning fuse, Crais still takes the time in Demolition Angel to sketch out some memorable characters: Starkey, haunted and hollow-eyed, covering up her pain with a Bogart-tough demeanor; and John Michael Fowles (aka Mr. Red), a sociopath who gets all sorts of information from the Internet without breaking a sweat. . . . Crais keeps things wound so tight that readers will be getting paper cuts in their rush to finish this one.”—The Denver Post

Robert Crais is the author of nine previous novels, including the bestselling and Edgar-nominated L.A. Requiem. In addition to his previous award-winning books, Crais has written for such acclaimed television shows as L.A. Law and Hill Street Blues. He lives in Los Angeles. Demolition Angel has been purchased by Columbia/TriStar and producer Laurence Mark (Jerry Maguire, As Good As It Gets), and is being developed as a major motion picture.

"[L.A. Requiem] manages at once to be a riveting serial-killer tale, a convincing revenge scenario, an engrossing police procedural, an affecting love story, and a tense action thriller."
--The Wall Street Journal

"One of the best crime novels I've ever read. Absolutely terrific!"
--David Baldacci

"Crais has crafted a full-bodied novel that explores such topics as honor and friendship and justice and love, that brings its protagonists to a new point of self-awareness...  and provides the kind of puzzle plot that sends mystery fans into paroxysms of joy."
--Los Angeles Times

"L.A. Requiem is a powerful portrait of Los Angeles in our time: swift, colorful, gripping, a real knockout."
--Dean Koontz

"Darker, denser, deeper, and more satisfying than anything he's written before."
--Denver Post