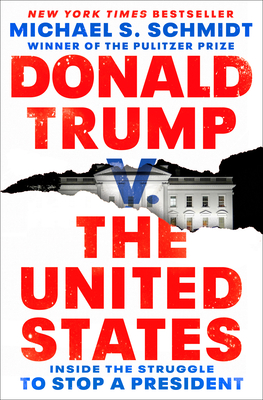 NEW YORK TIMES BESTSELLER • With unparalleled reporting, a Pulitzer Prize–winning New York Times reporter chronicles the clash between a president and the officials of his own government who tried to stop him.

“A meticulously reported volume that clearly benefits from the author’s extraordinary access . . . [a] startling dissection of the Trump presidency.”—The New York Times

Drawing on secret FBI and White House documents and confidential sources inside federal law enforcement and the West Wing, Donald Trump v. The United States tells the dramatic, high-stakes story of those who felt compelled to confront and try to contain the forty-fifth president of the United States as he shredded norms and sought to expand his power, bringing American democracy to the brink.

Michael S. Schmidt broke many of the major stories of the Trump era, from the news of Hillary Clinton’s use of a personal email account to the report on the memos of former FBI director James Comey’s conversations with Trump that led directly to the appointment of special counsel Robert S. Mueller III. In Donald Trump v. The United States, Schmidt takes us inside the defining events of a presidency, chronicling the clash between an increasingly emboldened president and the officials of his own government who found themselves trying to thwart the president they had once pledged to serve. Through their eyes and ears, we observe an epic struggle to stop a rogue agent in our nation’s highest office. A vital work of journalism, Donald Trump v. The United States is a riveting contemporary history and a lasting account of just how fragile and vulnerable American democracy really is.

Michael S. Schmidt is a two-time Pulitzer Prize–winning Washington correspondent for The New York Times. Over his fifteen years at the Times, he has covered the investigations of the Trump presidency, the Pentagon, the FBI, the Department of Homeland Security, and the war in Iraq. He started his career at The New York Times as a clerk answering the phones on the foreign desk before becoming a sports reporter covering performance-enhancing drugs and legal issues. He is a graduate of Lafayette College.

“[Michael S.] Schmidt chronicles how the professionals around the president tried to bring order to the White House and to keep Trump within the bounds of the law. . . . A powerful accounting of . . . lawlessness and chaos.”—The Washington Post