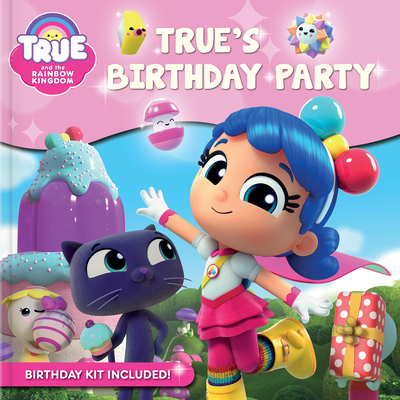 Bartleby the Cat plans a special birthday for his best friend True, but things don't go exactly as planned True's friends work hard to prepare the celebration, especially Grizelda, whose overconfident enthusiasm leads to trouble in the Rainbow
Kingdom. Will True and Bartleby be able to save the day? Find out in this fun, colorful and whimsical book.

About True and the Rainbow Kingdom:

True is a fearless eight-year-old who helps the whimsical citizens of the Rainbow Kingdom alongside her best friend, Bartleby the Cat. When something goes awry in the Kingdom, True is the only one with the ability to wake the powers of the Magical Wishes of the Wishing Tree. She keeps the citizens safe and empower those around her with imagination, empathy, and mindfulness.

True and the Rainbow Kingdom books are based on the top-rated American-Canadian animated children's web series produced for Netflix by Home Plate Entertainment, in collaboration with American artist duo FriendsWithYou, and Pharrell Williams' I Am Other. It is based on the artwork by FriendsWithYou.