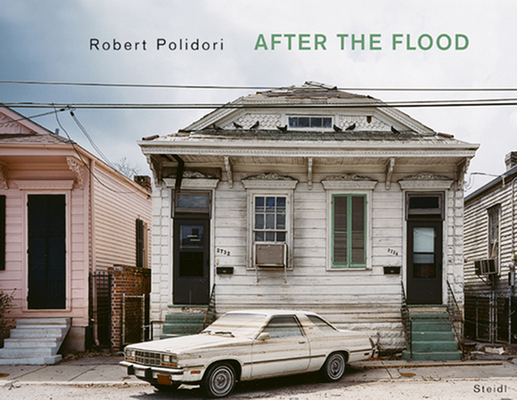 In late September 2005, Robert Polidori traveled to New Orleans to record the destruction caused by Hurricane Katrina and by the city's broken levees. He found the streets deserted, and, without electricity, eerily dark. The next day he began to photograph, house by house: "All the places I went in, the doors were just open. They had been opened by what I collectively call the army, ' of maybe 20 National Guards from New Hampshire, 15 policemen from Minneapolis, 20 firefighters from New York... On maybe half of them or a third of them that I went in, I think that the occupants had been there prior. And some of them did leave certain funeral-like mementos before they left. Maybe right after the waters receded they had the chance to just--to go back to their place and just see, and realize there's nothing worth saving." Amidst all this, Polidori has found something worth saving, has created mementos for those who could not return, documenting the paradoxically beautiful wreckage. In classical terms, he has found ruins. The abandoned houses he recorded were still waterlogged as he entered and as he learned (by trial and error, a process that including finding a dead body) the language of signs and codes in which rescue workers had spray-painted each house's siding. He sees the resulting photographs as the work of a psychological witness, mapping the lives of the absent and deceased through what remains of their belongings and their homes.