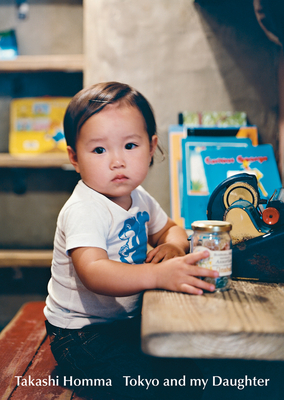 The intention behind Takashi Homma: Tokyo and My Daughter is best explained by the photographer himself: "I love my daughter very much. I love Tokyo very much." Homma's (born 1963) affection is nearly tangible in this series of 32 color photographs in which images of his daughter are placed beside detail shots of the city's cars, houses and trees.

Homma's daughter, captured in various stages of toddlerhood in everyday locations, stares serenely just beyond the camera lens, unselfconscious and generally appearing more interested in the person holding the camera than the device itself: in one photograph, she peers out curiously from the backseat of a car, while in another she points her own tiny pink camera back at her father. Homma's photography is imbued with a warmth and sincerity that belies his total familiarity with the subjects at hand; he documents Tokyo's urban landscape with the same tenderness he brings to portraying his daughter.