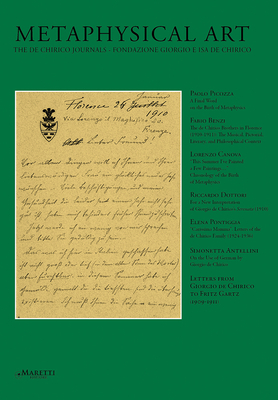 - This biennial periodical is dedicated to recent scholarship on Giorgio de Chirico's art with contributions by internationally recognized academics as well as a new generation of researchers - Authors/Contributors to this edition include: Paolo Picozza, Fritz Gartz, Simonetta Antellini, Elena Pontigia, Fabio Benzi, Lorenzo Canova, Francesco Caruso, Italo Calvino, and Riccardo Dottori This issue of Metaphysical Art - The de Chirico Journals no. 21/22 (2022), centers around Giorgio de Chirico's correspondence with his friend Fritz Gartz (1909-1911), which has been transcribed and translated into English. A related essay by Simonetta Antellini discusses de Chirico's writing style and use of the German language. Other essays include Fabio Benzi's examination of Florence's cultural milieu in the years 1910-1911, which analyzes the musical, artistic, literary, and philosophical context in which Metaphysics was born. Elena Pontiggia presents a large and previously unpublished collection of letters written by de Chirico to his mother Gemma Cervetto, which has recently been acquired by the Foundation. Riccardo Dottori's article offers a new interpretation of the painting Serenata (1910), based on a fresh literary source: On the Cave of the Nymphs by the ancient Neoplatonic philosopher Porphyry. Completing this volume is a narrative essay by Italo Calvino entitled Cities of Thought (1983), translated into English and introduced by Anne Greeley, which was published alongside a major Paris retrospective of de Chirico's metaphysical works.