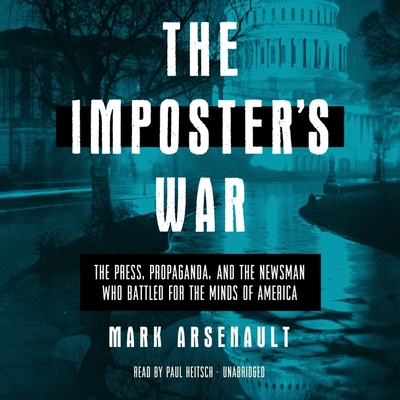 By Mark Arsenault, Paul Heitsch (Read by)
$41.95
Email or call for price

The shocking history of the espionage and infiltration of American media during WWI and the man who exposed it. A man who was not who he seemed ...

Russia was not the first foreign power to influence American popular opinion from the inside. In the lead-up to America's entry into the First World War, Germany spent the modern equivalent of one billion dollars to infiltrate American media, industry, and government in order to undermine the supply chain of the Allied forces. If not for the ceaseless activity of John Revelstoke Rathom, editor of the scrappy Providence Journal, America may have remained committed to its position of neutrality. But he emerged to galvanize American will, creating the conditions necessary for President Wilson to request a Declaration of War from Congress--all the while expelling German diplomats and exposing sensational plots along the way.

And yet John Rathom was not his real name. And his many acts of journalistic heroism, which he recounted on nationwide speaking tours to rapt audiences, never happened. Who then was this great, beloved, and ultimately tragic imposter?

In The Imposter's War, Mark Arsenault unearths the truth about Rathom's origins and revisits a surreal and too-little-known passage in American history that reverberates today.

The legend of John Rathom encompasses the propaganda battle that set the US on a course for war. He rose within the editorial ranks, surviving romantic scandals and combating rivals, eventually transitioning from an editor to a de facto spy (and enthusiastic collaborator) with Great Britain. He brought to light the Huerta plot (in which Germany offered an alliance to Mexico, promising them the arms necessary to retake territory lost in the Mexican-American War) and helped to upend labor strikes organized by German agents to shut down American industry.

But Rathom was eventually brought low, having exhausted the goodwill of the Department of Justice by an up-and-coming Franklin D. Roosevelt, when he embarrassed the US Navy with coverage of a sex scandal.

Arsenault tracks the rise and fall of this enigmatic figure, while providing the rich and fascinating context of Germany's acts of subterfuge and the early years of World War I. The Imposter's War is a riveting and spellbinding narrative of a flawed man who nevertheless changed the course of history.