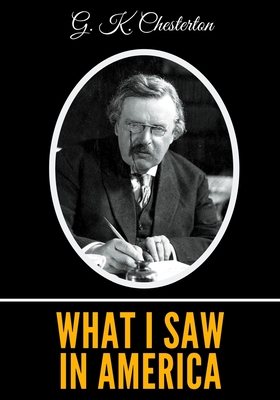 Let me begin my American impressions with two impressions I had before I went to America. One was an incident and the other an idea; and when taken together they illustrate the attitude I mean. The first principle is that nobody should be ashamed of thinking a thing funny because it is foreign; the second is that he should be ashamed of thinking it wrong because it is funny. The reaction of his senses and superficial habits of mind against something new, and to him abnormal, is a perfectly healthy reaction. But the mind which imagines that mere unfamiliarity can possibly prove anything about inferiority is a very inadequate mind. It is inadequate even in criticising things that may really be inferior to the things involved here. It is far better to laugh at a negro for having a black face than to sneer at him for having a sloping skull. It is proportionally even more preferable to laugh rather than judge in dealing with highly civilised peoples. Therefore I put at the beginning two working examples of what I felt about America before I saw it; the sort of thing that a man has a right to enjoy as a joke, and the sort of thing he has a duty to understand and respect, because it is the explanation of the joke.cWhen I went to the American consulate to regularise my passports, I was capable of expecting the American consulate to be American. Embassies and consulates are by tradition like islands of the soil for which they stand; and I have often found the tradition corresponding to a truth. I have seen the unmistakable French official living on omelettes and a little wine and serving his sacred abstractions under the last palm-trees fringing a desert. In the heat and noise of quarrelling Turks and Egyptians, I have come suddenly, as with the cool shock of his own shower-bath, on the listless amiability of the English gentleman. The officials I interviewed were very American, especially in being very polite; for whatever may have been the mood or meaning of Martin Chuzzlewit, I have always found Americans by far the politest people in the world. They put in my hands a form to be filled up, to all appearance like other forms I had filled up in other passport offices. But in reality it was very different from any form I had ever filled up in my life. At least it was a little like a freer form of the game called 'Confessions' which my friends and I invented in our youth; an examination paper containing questions like, 'If you saw a rhinoceros in the front garden, what would you do?' One of my friends, I remember, wrote, 'Take the pledge.' But that is another story, and might bring Mr. Pussyfoot Johnson on the scene before his time. - Taken from "What I Saw in America" written by G. K. Chesterton.