Meet beloved author Ann Ross as she reads from and signs her new book in her famed Miss Julia series, MISS JULIA RENEWS HER VOWS.

Readers flock to Ann Ross and her popular southern heroine.  MISS JULIA RENEWS HER VOWS is filled with the wit, sass, and quirky charm we've gown to love.

Bevil Knapp’s photographs do more than capture the spectacular beauty of Louisiana’s River Bluff country. They transport the viewer, bewitched, to the stillunspoiled landscapes of a more peaceful era.
— John Berendt, author of Midnight in the Garden of Good and Evil

Join us for an evening with award-winning photographer Bevil Knapp in celebration of the release of ST. FRANCISVILLE: Louisiana's Historic River Bluff Country.

In the rolling hills of Louisiana's Felicianas, less than an hour north of Baton Rouge on the east bank of the Mississippi River, lies the historic community of St. Francisville. For generations, this picturesque town has inspired a variety of creative artists, from naturalist John James Audubon, whose experiences in the area helped make him the world's greatest bird artist, to acclaimed novelist Katherine Anne Porter, who wrote one of her best travelogues, "Audubon’s Happy Land," in 1939 after a visit to St. Francisville. Photographer Bevil Knapp embraces this lively tradition by lending her own perspective on a region Audubon once praised as an expression of "the greatness of the Creator in all his unrivaled works."

Vividly evoking St. Francisville's fabled past as plantation country, Knapp offers stunning views of the stately historic homes that draw thousands of tourists annually—including Oakley, Live Oak, Rosebank, Rosedown, and The Myrtles, among many others. But Knapp's images are more than mere architectural studies; they artfully invite the viewer to ponder who lived behind the windows of these historic homes—and who might live there still. Knapp also captures the area's unmatched natural bounty, documenting the woods, waterways, and wildlife of a region that, in many ways, has remained unchanged for centuries.

In addition to honoring St. Francisville's strong links to the past, Knapp's photographs reveal the town's continuing vitality as a respite from urban life. St. Ferdinand Street, a vibrant collage of small-town southern life; Afton Villa Baptist Church, a thriving African American congregation founded in 1871; Tunica Hills, a popular hiking destination named for the Tunica Indians who lived in the area for centuries; the nearby Port Hudson Civil War battlefield, site of thrilling annual reenactments—all reveal their singular charm through Knapp's knowing lens. In an introductory essay, acclaimed journalist and author Danny Heitman offers a poetic counterpoint to Knapp's imagery, reflecting on photographs that, for all their historical resonance, "hum with the immediacy of news."

Ultimately, Knapp's images transcend time, illuminating a flourishing community of unrivaled natural and historical beauty. A cherished memento for locals and visitors alike, St. Francisville summons readers to discover the rich treasures of this wondrous region for themselves.

Bevil Knapp is a freelance photographer and lives in Covington, Louisiana, with her husband. She is coauthor of AMERICA'S WETLAND: Louisiana's Vanishing Coastand a former staff photographer for The Times-Picayune and The Baton Rouge Advocate. Please join us for a very special evening with Michael Lewis, author of THE BLIND SIDE, for a discussion and booksigning celebrating his new book, THE BIG SHORT: Inside the Doomsday Machine.

A brilliant account—character-rich and darkly humorous—of how the U.S. economy was driven over the cliff.

Truth really is stranger than fiction. Who better than the author of the signature bestseller Liar’s Poker to explain how the event we were told was impossible—the free fall of the American economy—finally occurred; how the things that we wanted, like ridiculously easy money and greatly expanded home ownership, were vehicles for that crash; and how shareholder demand for profit forced investment executives to eat the forbidden fruit of toxic derivatives. 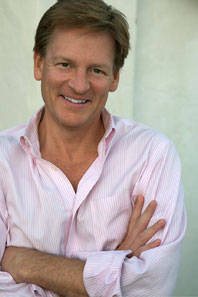 Michael Lewis’s splendid cast of characters includes villains, a few heroes, and a lot of people who look very, very foolish: high government officials, including the watchdogs; heads of major investment banks (some overlap here with previous category); perhaps even the face in your mirror. In this trenchant, raucous, irresistible narrative, Lewis writes of the goats and of the few who saw what the emperor was wearing, and gives them, most memorably, what they deserve. He proves yet again that he is the finest and funniest chronicler of our times. "Howard Mosher is, for my money, the most natural storyteller around." - Richard Russo

You are invited to an evening with novelist Howard Mosher as he gives a reading and slide show presentation featuring his stunning and lyrical Civil War thriller, Walking to Gatlinburg -- a spellbinding story of survival, wilderness adventure, mystery, and love in the time of war.

The slide show is called "Transforming History into Fiction: the Story of a Born Liar." It's an account of how, over a seven-year period, Mosher wrote Walking to Gatlinburg forty to fifty times, took five lengthy research trips down South, read any number of books about the Civil War, and how he came up with the events and characters.

Join us as Sally Forman (author) and Margaret Saer Beer (photographer)signs their new book featuring over 70 entrepreneurs who invented, pioneered, or innovated within their fields while revealing the early obstacles they encountered as they capitalized on their ideas to build ground-breaking businesses. Many of the names in this book are synonymous with New Orleans' past and present, and others are sure to be a part of its future. Emeril wrote the foreword and entrepreneur profiles range from Those That Become a Legend: Edmund McIlhenney, Andrew Higgins, Ruth Fertel and Alton Ocshner, to those At the Helm: Doc Laborde, Jerry Goldman, Leah Chase and David Oreck, and, finally, those On the Horizon, including NAKEDpizza, iSeatz and Suzanne Perron.