Please join us for a very special visit with celebrated children's author/illustrator Marc Brown who is coming to Octavia Books just in time to gear up for Earth Day with ARTHUR TURNS GREEN, his first new Arthur picture book in almost ten years!

Arthur comes home from school and begins sneaking around the house, taking notes and talking about a Big Green Machine. D.W. is suspicious of her brother's weird behavior, but when Arthur shows up late for dinner with green hands, she really gets the creeps! But it turns house Arthur is making a poster listing all the ways to save energy at home--and go green!

This heartwarming story will be printed on recycled paper with soy based ink.

Marc Brown is the creator of the bestselling Arthur Adventure book series and co-developer of the children's PBS television series, Arthur. He has also created a second book series, featuring D.W., Arthur's little sister, as well as numerous other books for children. Marc Brown lives with his family in Tisbury, Massachusetts on Martha's Vineyard. Please join Octavia Books and the Gulf Restoration Network for an evening with master storyteller Mark Kurlansky who will present and sign WORLD WITHOUT FISH, his riveting new book for kids about the threat to fish, the oceans, and our environment -- and what, armed with knowledge, kids can do about it.

In this amazing book, Mark Kurlansky tells how the fish we most commonly eat could become extinct in fifty years, and the domino effect that this would have, from the oceans turning pink to seabirds, then reptiles, then mammals disappearing.  It explains the complicated effects of overfishing, global warming, and pollution and the dangers of fish farming.

But there's hope.  By becoming advocates for sustainable fishing, kids can begin to put the planet back on the right track, one fish at a time.

Interwoven with the book is a 12-page full-color graphic novel. Each beautifully illustrated chapter opener links to form a larger fictional story that complements the text. Hand in hand, they create a Silent Spring for a new generation.

Children are welcome at this event. 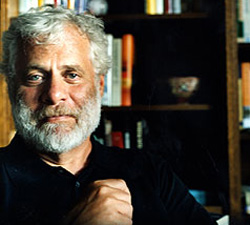 Mark Kurlansky is a former commercial fisherman and New York Times bestselling author of Cod, Salt, The Big Oyster, and other books. He’s won numerous awards, including the James A. Beard Award, ALA Notable Book Award, and New York Public Library Best Books of the Year Award. He lives with his wife and daughter in New York City and Gloucester, Massachusetts.

A time that changed the world.

A time that changed Franny’s life.

Franny Chapman just wants some peace. But that’s hard to get when her best friend is feuding with her, her sister has disappeared, and her uncle is fighting an old war in his head. Her saintly younger brother is no help, and the cute boy across the street only complicates things. Worst of all, everyone is walking around just waiting for a bomb to fall.

It’s 1962, and it seems that the whole country is living in fear. When President Kennedy goes on television to say that Russia is sending nuclear missiles to Cuba, it only gets worse. Franny doesn’t know how to deal with what’s going on in the world — no more than she knows how to deal with what’s going on with her family and friends. But somehow she’s got to make it through.

Countdown features a captivating story interspersed with footage from 1962. Deborah Wiles has created a documentary novel that will put you right alongside Franny as she navigates a dangerous time in both her history and our history. It is an experience you will never forget.

Look for JFK and Khrushchev to leap off the page, along with Sandy Koufax, Pete Seeger, Fannie Lou Hamer, Cassius Marcellus Clay, James Bond, and more. Photographs, song lyrics, advertisements, news clippings, and television snippets populate the pages of this story about the sixteen days when the world came as close as it has ever come to nuclear annihilation.

Deborah Wiles is the author of two picture books, ONE WIDE SKY and FREEDOM SUMMER, and four middle-grade novels: LOVE, RUBY LAVENDER, EACH LITTLE BIRD THAT SINGS (a 2005 National Book Award Finalist), THE AURORA COUNTY ALL-STARS, and her new novel, COUNTDOWN, book one of The Sixties Trilogy for Young Readers.

Her work has received the Ezra Jack Keats New Writer Award, the PEN/Phyllis Reynolds Naylor Working Writer Fellowship, and the E.B. White Read-Aloud Award. She has taught writing workshops to thousands of children and teachers all over the country. She teaches in the MFA in Writing for Children Program at Vermont College and lives in Atlanta, where she grows the world’s most beautiful zinnias, climbs Stone Mountain, and avoids the Atlanta traffic. 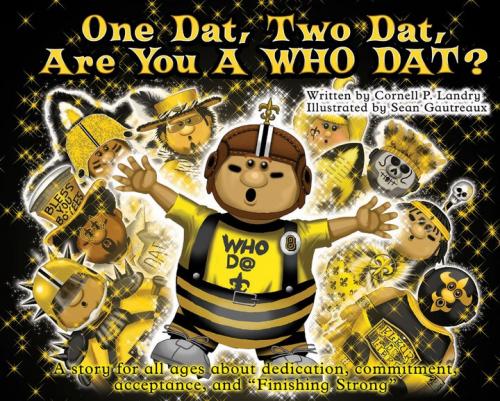 Cornell Landry, author of Goodnight NOLA, returns with his latest picture book, One Dat, Two Dat, Are You a Who Dat? Please join us at Octavia Books as we host the Hermann-Grima/Gallier Historic Houses "Pages of Time" Mother/Daughter Book Club.  Travel back in time through historical fiction and delight in the splendors of the past in order to learn more about the world we live in today.

The November selection: The Evolution of Calpurnia Tate, by Jacqueline Kelly

Explore the wonders of the natural world alongside the precocious Calpurnia, a young girl who finds more joy in collecting specimens with her grandfather than she does in needlepointing or cooking.

For each mother/daughter pair there is a small fee, payable to the Hermann-Grimma/Gallier Historic Houses: $20.00 per session or $30.00 for the season - October & November. There will be refreshments served and participants will get a free pass to Hermann-Grimma House.

Participants will receive a 10% discount at Octavia Books on the book club selections.

Yat and Dat are two lovable, colorful birds who are jealous of the great food of New Orleans. One day they are so tired of scraps and seeds that they decide to make their own masterpiece. Off they fly around the city snagging bits of specialties from fabulous New Orleans restaurants. One by one they add their favorites to the bubbling pot, only to find that "it tastes like river water!" In the end they realized that it's best to "leave it to da chefs. Dey really know what's cookin'!"

Nancy Parker is a two-time Emmy Award winning journalist who also received the distinguished Edward R. Murrow Award for her reporting and documentary work. She was born and raised in Opelika, Alabama. After reporting and anchoring for television stations in Georgia and Alabama, she moved on to Baton Rouge and then New Orleans where she anchors the nightly news on WVUE Fox 8. Hester Bass will stop by Octavia Books in the afternoon to sign copies of her wonderful book, THE SECRET WORLD OF WALTER ANDERSON.  Please stop by and meet her or call us an reserve a signed edition. “These lithe, game-loving animals seem to swirl across the pages in stylized pen-and-ink and watercolor pictures that are both comedic and beautiful (the style is in keeping with Beard’s The Jungle Grapevine).”
—Publishers Weekly

Please join us for a special afternoon of storytelling, booksigning and hands-on art when beloved children’s author and critically-acclaimed fine artist Alex Beard returns to Octavia Books for the New Orleans release of MONKEY SEE, MONKEY DRAW. This fun fable from Africa is a follow-up to his wildly popular first picture book The Jungle Grapevine. Readers will find new creative inspiration as a group of mischievous monkeys learn lessons in overcoming fears and unleashing their inner artist—without making fun of or competing against one another.

The monkeys who live at the foot of the Mbuno Hills in Africa love to play games. One day while playing “Elephant in the Middle” with their large friend, their “ball,” which is really a nut from an ancient baobab tree, rolls into a cave where the troop of monkeys never go. It is dark and possibly filled with horrible beasts! When they finally venture in, they discover that the walls are covered with beautiful paintings of animals. Eager to create their own artwork, Elephant shows the monkeys how they too can paint with mud using their hands and feet as stamps. But things are never quite as easy as they seem.

Alex Beard is an a painter and author who has emerged as one of his generation's most creative and successful artists. Through his work, he hopes to demystify art and share the creative experience with as many people as possible, using every tool he can find. Influenced to think creatively from a young age by his uncle, noted photographer Peter Beard, Alex grew up among some of the world's most interesting and influential people -- Andy Warhol, Truman Capote, and their Pop World cohorts were familiar faces in the Beard household. Alex's French Quarter and New York City Studios have not just been chic destinations, but open to the public in a way that has encouraged and fostered interaction between the artist and his audience. A firm believer that art is a medium that should be accessible to everyone, Alex uses uncommon avenues to share the creative experience with people of all ages. He is also the author of The Jungle Grapevine, which Publishers Weekly called “visually compelling.” Endorsed by "Teachers of the Year" around the country, "Eric DelaBarre's Saltwater Taffy" follows the lives of five friends as they uncover a treasure map that once belonged to the ruthless New Orleans pirate, Jean Lafitte. The discovery thrusts them from one treasure hunting adventure to the next as they try to out-wit, out-think and out-maneuver everyone from the one-legged junk-yard man and an overbearing town bully, to the creepy old man living at the top of the hill. "Saltwater Taffy" is a raceto-the-finish adventure that will capture your heart, again and again!

As a writer from the TV show, THE BIG EASY, Eric DelaBarre said he will always love New Orleans and he is looking forward to hearing some great music in the Treme and catching up with old friends. He is an award winning filmmaker, speaker, and most recently, a ghostwriter for Random House/Harmony Books. Eric began his career with Dick Wolf on NBC’s mega-hit drama Law & Order, and has worked with 20th Century Fox, Samuel Goldwyn Films, Universal Studios and Lions Gate Films. His work has been sold around the world and showcased on HBO, Cinemax, Showtime, Starz/Encore, USA Network, and NBC. Eric is also the past-president of the Boys & Girls Club of Santa Monica Council. 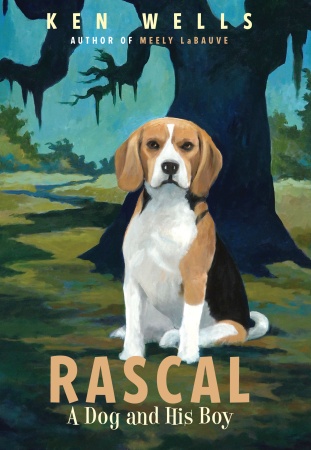 Rascal may be the happiest beagle ever to live. He used to live on Voclain’s Farm, with its whole jambalaya of dogs, but now he lives with his very own boy, Meely. Together they explore the Louisiana bayou, bunny chasin’, coon and squirrel huntin’, and crawfishin’. But when Meely gets stuck on a rotting bridge deep in the bayou, it’s up to Rascal—with a little help from his old friends at the farm—to save his boy from danger.


In the spirit of Huckleberry Finn, Rascal is a classic coming-of-age story, but from a dog’s perspective. With unforgettable characters, heart-stopping action, and charming black-and-white line drawings that capture it all, this zesty gumbo of a book is one to savor long after it is finished.